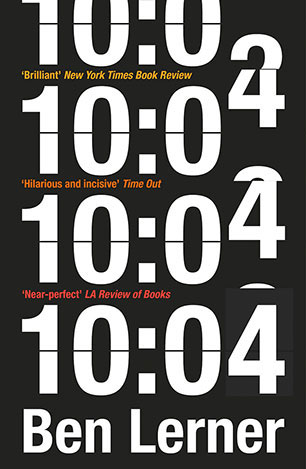 Shortlisted for the Folio Prize and internationally celebrated by critics and readers alike, here is a dazzling and utterly original novel about making art, love, and children during the twilight of an empire.

In the past year, the narrator of 10:04 has enjoyed unexpected literary success, been diagnosed with a potentially fatal heart condition, and been asked by his best friend to help her conceive a child. Now, in a New York of increasingly frequent superstorms and political unrest, he must reckon with his biological mortality, the possibility of a literary afterlife, and the prospect of (unconventional) fatherhood in a city that might soon be under water.

In prose that Jonathan Franzen has called 'hilarious. cracklingly intelligent. and original in every sentence', Lerner's new novel charts an exhilarating course through the contemporary landscape of sex, friendship, memory, art and politics, and captures what it is like to be alive right now.
More books by this author

Born in Kansas in 1979, BEN LERNER is the author of three books of poetry, The Lichtenberg Figures, Angle of Yaw, and Mean Free Path. He has been a finalist for the National Book Award, a Fulbright Scholar in Spain, and the recipient of a Howard Foundation Fellowship. In 2011 he became the first American to win the Munster State Prize for International Poetry. He teaches in the writing program at Brooklyn College. His first novel was Leaving the Atocha Station.