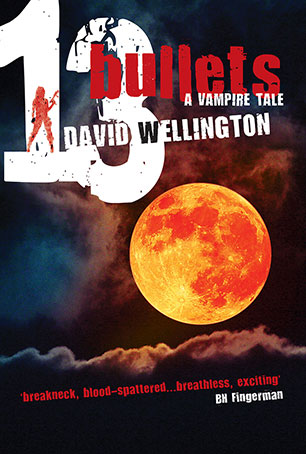 The hottest bad boys in contemporary fiction are cold-blooded vampires. (USA TODAY). This is the first book in the David Wellington vampire trilogy.;

The monster knelt in the mud, his balled fists punching at the ground, his head bowed. He started to get up and Arkeley shot him again. He'd had thirteen bullets to start with how many did he have left?

All the official reports say they are dead-extinct since the late '80s, when a fed named Jameson Arkeley nailed the last vampire in a fight that nearly killed him. But the evidence proves otherwise.

When a state trooper named Caxton calls the FBI looking for help in the middle of the night, it is Arkeley who gets the assignment - who else? He's been expecting such a call. Sure, it's been years since any signs of an attack, but Arkeley knows what most people don't: there is one left. In an abandoned asylum she is rotting, plotting and biding her time in a way that only the undead can.

Caxton is out of her league on this case and more than a little afraid the fed's made it plain that there is only one way out. But the worst thing is the feeling that the vampires want more than just her blood. They want her for a reason, one she can't guess; a reason her sphinxlike partner knows but won't say; a reason she has to find out or die trying.

David Wellington is moving the literature of the undead into the 21st century with new levels of brutality.' LA Times

It'll have you double-checking the locks and laying in extra garlic.' Men's Health
More books by this author

David Wellington made a name for himself in the supernatural genre with his Monster Island trilogy, which broke out as an online serialized novel before it was published by Thunder's Mouth Press. It was recently optioned by screenwriter Stephen Susco ( The Grudge ).