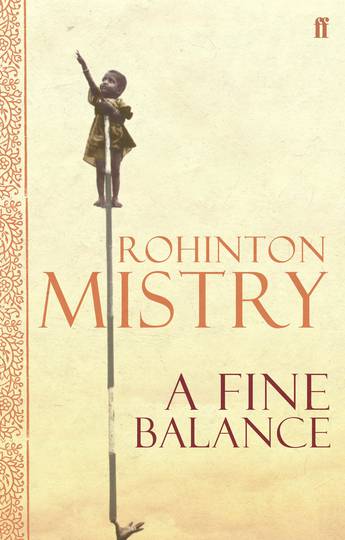 A perennial bestseller, A Fine Balance is consistently acclaimed as a masterpiece from one of the most gifted writers of our time.

In mid-1970s urban India - a chaos of wretchedness on the streets and slogans in the offices - a chain of circumstances tosses four varied individuals together in one small flat. Stubbornly independent Dina, widowed early, takes in Maneck, the college-aged son of a more prosperous childhood friend and, more reluctantly, Ishvar and Om, uncle and nephew tailors fleeing low-caste origins and astonishing hardships. The reader first learns the characters' separate, compelling histories of brief joys and abiding sorrows, then watches as barriers of class, suspicion, and politeness are gradually dissolved. Even more affecting than Mistry's depictions of squalor and grotesque injustice is his study of friendships emerging unexpectedly, naturally. The novel's coda is cruel and heart-wrenching but deeply honest.
More books by this author

Rohinton Mistry was born in 1952 and grew up in Bombay, India, where he also attended university. He later emigrated to Canada, where he began a course in English and Philosophy at the University of Toronto. He is the author of three novels and one collection of short stories. His debut novel, Such a Long Journey (1991), won the Commonwealth Writers Prize for Best Book and the Governor General's Award, and was shortlisted for the Booker Prize. It was made into an acclaimed feature film in 1998. His second novel, A Fine Balance (1995), won many prestigious awards, as well as being shortlisted for the Booker Prize, the International IMPAC Dublin Literary Award and the Irish Times International Fiction Prize. His collection of short stories,Tales from Firozsha Baag, was published in 1987.