A Spot of Folly

Ten and a Quarter New Tales of Murder and Mayhem 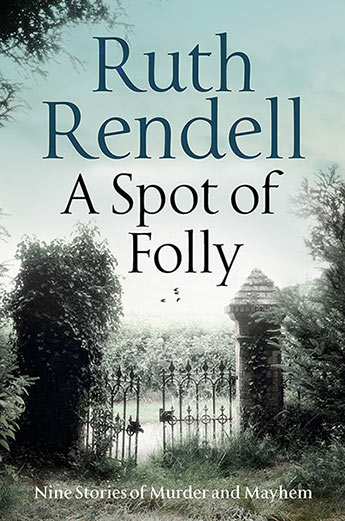 Elegant and chilling - new uncollected and unpublished short stories from a master of psychological suspense.

New and uncollected tales of murder, mischief, magic and madness.

Ruth Rendell was an acknowledged master of psychological suspense: these are ten (and a quarter) of her most chillingly compelling short stories, collected here together for the first time.

In these tales, a businessman boasts about cheating on his wife, only to find the tables turned. A beautiful country rectory reverberates to the echo of a historical murder. A compulsive liar acts on impulse, only to be lead inexorably to disaster. And a wealthy man finds there is more to his wife's kidnapping than meets the eye.

Atmospheric, gripping and never predictable, this is Ruth Rendell at her inimitable best.

The stories are: Never Sleep in a Bed Facing a Mirror; A Spot of Folly; The Price of Joy; The Irony of Hate; Digby's Wives; The Haunting of Shawley Rectory; A Drop Too Much; The Thief; The Long Corridor of Time; In the Time of his Prosperity; and Trebuchet.
More books by this author

Ruth Rendell was one of the great crime writers. Her books - notable for their careful psychological observation, as well as their gripping plots - have sold over 20 million copies worldwide, and she won numerous awards, including the Crime Writers' Association Cartier Diamond Dagger for sustained excellence in crime writing. In 1996 she was awarded the CBE and in 1997 became a Life Peer. Ruth Rendell died in May 2015