Home>Browse>Books>Fiction>An Unsuitable Job for a Woman 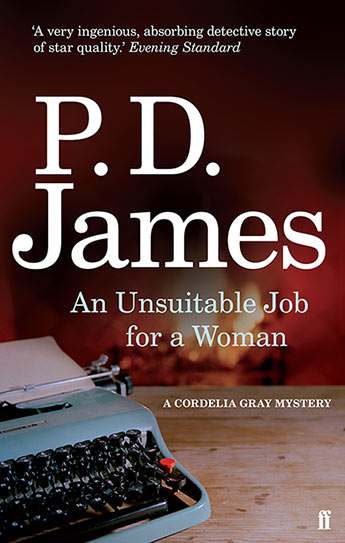 Meet Cordelia Gray: twenty-two, tough, intelligenta nd now sole inheritor of the Pryde Detective Agency. Her first assignment finds her hired by Sir Ronald Callender to investigate the death of his son Mark, a young Cambridge student found hanged in mysterious circumstances. Required to delve into the hidden secrets of the Callender family, Cordelia soon realises it is not a case of suicide, and that the truth is entirely more sinister.
More books by this author More books in this series

P. D. James was born in Oxford in 1920. She has won awards for crime writing in Britain, America, Italy and Scandinavia, including the Mystery Writers of America Grandmaster Award and the National Arts Club Medal of Honor for Literature (US). She has received honorary degrees from seven British universities, was awarded an OBE in 1983 and was created a life peer in 1991. In 1997 she was elected President of the Society of Authors. She lives in London and Oxford and has two daughters, five grandchildren and seven great-grandchildren.