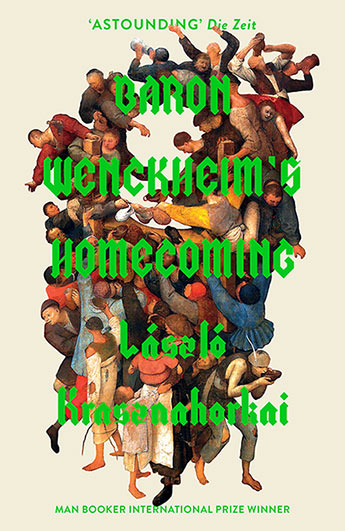 Nearing the end of his life, Baron Bela Wenckheim decides to return to the provincial Hungarian town of his birth. Having escaped from his many casino debts in Buenos Aires, where he was living in exile, he wishes to be reunited with his high-school sweetheart Marika. What follows is an endless storm of gossip, con men and local politicians, vividly evoking the small town's alternately drab and absurd existence.

Meanwhile, the Professor - a world-famous natural scientist who studies mosses and inhabits a bizarre Zen-like shack in a desolate area outside of town - offers long rants and disquisitions on his own attempts to immunise himself from thought. Spectacular actions are staged, death and the abyss loom, until finally doom is brought down on the unsuspecting residents of the town.

Hailed internationally as perhaps the most important novel of the young twenty-first century, Baron Wenckheim's Homecoming is the culmination of Laszlo Krasznahorkai's remarkable and singular career.

'I've said a thousand times that I always wanted to write just one book. Now, with Baron, I can close this story. With this novel I can prove that I really wrote just one book in my life. This is the book - Satantango, Melancholy, War & War, and Baron. This is my one book.' Laszlo Krasnahorkai
More books by this author More books in this series

Laszlo Krasznahorkai was born in Gyula, Hungary, in 1954. He has written five novels and won numerous prizes, including the 2013 Best Translated Book Award in Fiction for Satantango, the same prize the following year for Seiobo There Below, and the 1993 Best Book of the Year Award in Germany for The Melancholy of Resistance. He was shortlisted for the Man Booker International Prize in 2017 for The World Goes On, and won the same prize in 2015 in its original guise as a biennial prize rewarding an outstanding body of work. His books have been translated into more than a dozen languages. He lives in the hills of Pilisszentlaszlo in Hungary.