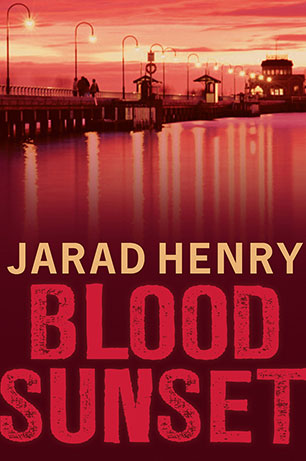 In the grip of a blistering Melbourne heat wave, a teenager is found dead in a St Kilda loading bay with a syringe hanging from his arm - is it an overdose or something more sinister? Assigned to the case, Detective Rubens McCauley soon he finds himself up against a secret network of paedophiles, child abusers and underage prostitutes . . . brilliantly plotted, this is witty, gritty crime writing

When the sun lowers itself into the bay and leaves the sky over St Kilda a dark crimson, it's beautiful and threatening at the same time. But the tourists don't see it that way. They only see the pretty colours and the calm water, the restaurants and the palm trees. They don't see the stabbings and the fights, the brawls and the rapes .

When a young runaway is found dead in St Kilda one morning, a syringe hanging out of his arm, no one is terribly shocked. A known junkie, the kid's criminal record was as long as the Scenic Railway. Even local detective Rubens McCauley is quick to conclude Dallas Boyd died of an accidental overdose.

But anomalies in the boy's death - and the haunting memory of a childhood friend - continue to nag at McCauley. Unable to shake his unease, he fights to revive the investigation. Case re-opened, he soon finds himself enmeshed in a secret network of paedophiles, child abusers and underage prostitutes.

Forced to look evil in the eye, McCauley must conquer his own demons as he battles to find justice for a young boy he never met but has come to know intimately in death .

Brilliantly plotted, Blood Sunset is an accomplished and gripping crime novel made even stronger by the author's insider knowledge of the world he depicts.

'Jarad Henry has redefined dangerous and it lurks on the brooding Melbourne streets - full of gangsters, drug dealers and alley crawlers .' - Crime Down Under

'Jarad Henry knows the genre and he knows how to write .' - Australian Book Review
More books by this author

Jarad Henry has worked in the criminal justice system for more than ten years, and is currently with the Police Drug Strategy Unit in Melbourne. He has a degree in criminology and regularly speaks about crime trends at conferences and seminars. Jarad's debut crime novel, Head Shot, was shortlisted for the Victorian Premier's Literary Awards, and for the Ned Kelly Awards Best First Crime Novel. Blood Sunset won the Fellowship of Australian Writers' Jim Hamilton Award, and was shortlisted for The Australian/Vogel Literary Award.