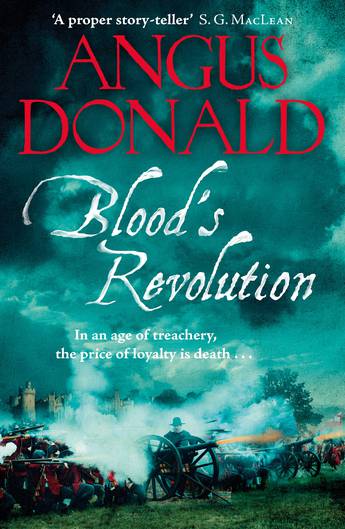 Mixing the fascinating and bloody events of the Stuart reign with thrilling historical fiction, the new series from bestselling author of the Outlaw Chronicles, Angus Donald, is perfect for fans of Conn Iggulden, James Forrester, S. J. Parris and The Favourite.

In an age of treachery everyone must pick a side . . .

It's 1685 and after the victory of Sedgemoor by King James II's men and the Bloody Assizes that followed, the British Isles faces an uneasy time. Many powerful men have grown tired of Catholic James's brutal, autocratic rule and seek to invite William, the Protestant Prince of Orange, to seize the thrones of the Three Kingdoms.

When Lieutenant Holcroft Blood, a brilliant but unusual gunnery officer in His Majesty's Ordnance, discovers that a sinister French agent, known only by his code name Narrey, has landed on English soil, he discovers a plan that could threaten the stability of the nation even further.

While revolution brews in the gentlemen's clubs of London, Holcroft faces a deadly choice - fight for his king, or fight for his friends.

Every decision has a consequence - would you be willing to pay the price?

Angus Donald was born in China in 1965 and educated at Marlborough College and Edinburgh University. For over twenty years he was a journalist in Hong Kong, India, Afghanistan and London. He now works and lives in Kent with his wife and two children.