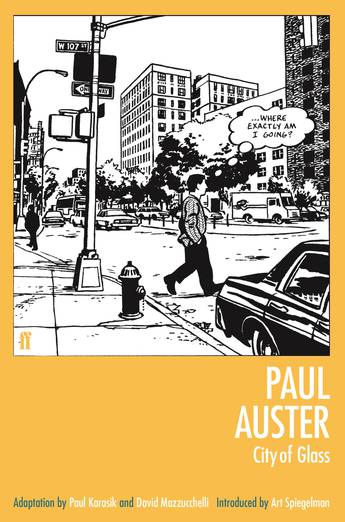 Paul Auster's spin on the detective story has been given a unique and unexpected new life.

'This reflected, shattered Glass introduces a whole new set of resonances to Auster's story, about the things images can and can't represent when language fails Miraculously, it deepens the darkness and power of its source.' Publisher's Weekly, Starred Review

City of Glass, the first part of Paul Auster's seminal work, The New York Trilogy, is perhaps the quintessential Auster story - an exploration of identity and language, whose narrative is kick-started by a random act of chance:

'It was a wrong number that started it, the telephone ringing three times in the dead of night, and the voice on the other end asking for someone he was not '

In the expert hands of David Mazzuchelli (Batman), Paul Karasik (Raw) and Art Spiegelman (Maus), Auster's dark and brilliant spin on the detective story has been given a unique and unexpected new life.

Paul Auster was born in Newark, New Jersey in the United States in 1947. He graduated from Columbia University with an MA degree. After returning to New York from Paris in 1974, he began his writing career. Throughout the 1970s he wrote mainly poetry and essays which appeared in various magazines including the New York Review of Books. During the 1980s he concentrated on prose writing. He is the author of nine novels, including The New York Trilogy, In the Country of Last Things, The Invention of Solitude, Moon Palace, The Music of Chance, Leviathan, Mr Vertigo and Timbuktu. He also edited the best-selling True Tales of American Life, the NPR National Story Project anthology. He is married with two children and lives in Brooklyn.