Home>Browse>Books>Fiction>Don't Skip Out on Me

Don't Skip Out on Me 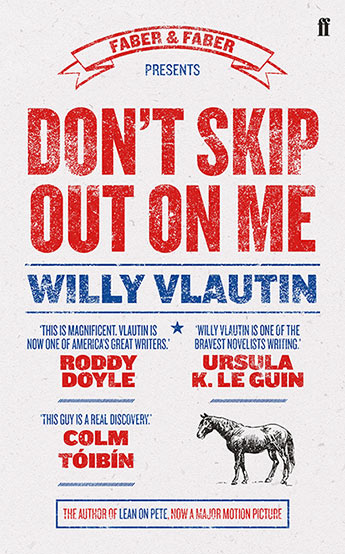 First novel in four years from the much-loved Willy Vlautin, of the bands Richmond Fontaine and The Delines ... and the upcoming movie Lean on Pete.

Meet Horace Hopper, a twenty-one-year-old farm hand in Tonopah, Nevada, who works for Mr Reece and his wife, the nearest thing he's had to family in years.

But Horace, half-white half-Paiute Indian, dreams of bigger things. Leaving behind the farm and its fragile stability, he heads South to re-invent himself as the Mexican boxer Hector Hidalgo. Slowly, painfully, the possibility emerges that his dreams might not just be the delusions of a lost soul. but at what cost, and what of those he's left behind?

Exploring the fringes of contemporary America, Don't Skip Out on Me is an extraordinary work of compassion - a novel about the need for human connection and understanding - and essential reading, now more than ever.
More books by this author

Born and raised in Reno, Nevada, Vlautin started playing guitar and writing songs as a teenager and quickly became immersed in music. It was a Paul Kelly song, based on Raymond Carver's Too Much Water So Close to Home that inspired him to start writing stories. Vlautin has published three novels, The Motel Life (2006) and Northline (2008) and Lean on Pete (2010), which was shortlisted for the IMPAC Dublin Literary Award. His fourth novel, The Free was published in 2014.

Vlautin founded the band Richmond Fontaine in 1994. The band has produced nine studio albums to date, plus a handful of live recordings and EPs. Driven by Vlautin's dark, story-like songwriting, the band has achieved critical acclaim at home and across Europe. 2014 will see the debut album from Vlautin's new band, The Delines, featuring vocalist Amy Boone (The Damnations).