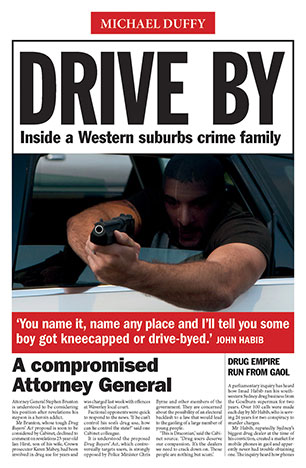 A searing, revealing, white-knuckle ride into the heart of a crime family straight out of tomorrow's headlines.

'If The Godfather was set in Sydney today, it would be about the Lebs. But brothers, lots of brothers. Fathers don't matter anymore.' - Detective Inspector Brian Harris

John Habib is the mechanic son of a Muslim Lebanese-Australian crime family in Sydney's Western suburbs. His oldest brother is in a maximum security prison, his middle brother is becoming increasingly fundamentalist, and his younger brother Rafi is on trial for a murder he swears he didn't commit. John has no reason to disbelieve Rafi but there are things going on in the family that he just doesn't understand. Why has his brother taken control of the family away from their father? Are the police really trying to set up Rafi? And what is the compelling evidence they say will put him away? John sets out to prove Rafi's innocence in the face of his predatory older brothers and some Lebanese-hating cops.

Bec Ralston is a good detective who doesn't know why she's been ordered to attend Rafi's trial. She was previously thrown off the investigation for voicing the opinion that Rafi might be innocent. As the court case goes badly wrong, she finds herself torn between her loyalty to the senior police she respects and the truth.

Not since Peter Temple's The Broken Shore and Truth has the world of criminals and police been so uncompromisingly and authentically drawn. This brilliant, fast-paced novel will seize you from its first page and not let you go till long after its explosive, mind-twisting conclusion.

'Duffy is indisputably a writer to watch. He will soon be ranked alongside the likes of international behemoths Michael Connolly, George Pelecanos and Don Winslow. There is no higher praise.' Sydney Morning Herald
More books by this author

Michael Duffy has worked for the Sydney Morning Herald and the Sun Herald as a reporter of crime and other urban issues. He has written two true crime books and the novels The Tower, about crime and globalisation, and The Simple Death, about voluntary euthanasia and the law.