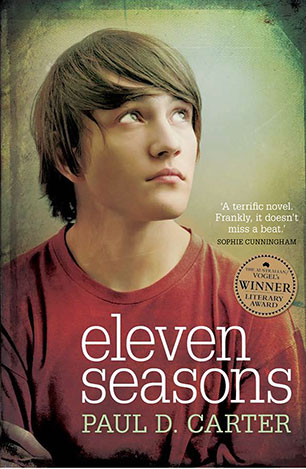 'Some guys are good at school and telling jokes or they have the latest stuff. Others are cricketers and basketball players: they can do things with the ball that make their classmates talk about them when they're not around. His thing is football. He becomes the centre of whichever team he plays for: he becomes the advantage.'

MELBOURNE, 1985. Jason Dalton sits on his bed and counts his football cards, dreaming of the day he too is immortalised in the public eye. He's young and gifted, a natural player who can do anything with the ball in his hand. If only everything else in his life was as obvious to him as playing.

GOLD COAST, 1991. The bottom has fallen out of Jason's life; he's now a high-school dropout, tired and wasted on the Gold Coast, with an explosive family secret still ringing in his ears. He needs to get his life back. But first he needs to find out who he is.

Paul D. Carter was born in Melbourne and spent much of his youth going to Collingwood Football matches with his Dad and brother Marcus. In 2001, Paul completed a Bachelor of Arts with honours from Deakin University and, in 2008 completed a PhD while writing Eleven Seasons. In writing Eleven Seasons, Paul was able to integrate his own experience of growing up in Melbourne in the 1980s with his keen interest in modern Australian history. He is especially interested in the sociological aspects of AFL and sport in society, in particular its sometimes fraught relationship with women. Paul currently teaches English and Creative Writing to secondary students in the western suburbs, as part of the Teach for Australia Programme.