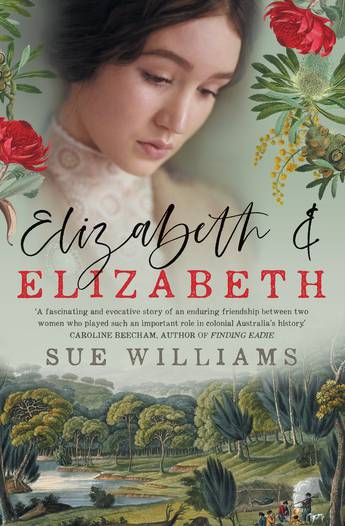 The story of how two women, who should have been bitter foes, combined their courage and wisdom to wield extraordinary power and influence behind the scenes of the fledgling colony.

'I've waited for this moment so long, dreamed of it, prepared for it, I can barely believe it's finally here. But it is. And it is nothing like I expected.'

There was a short time in Australia's European history when two women wielded extraordinary power and influence behind the scenes of the fledgling colony.

One was Elizabeth Macquarie, the wife of the new governor Lachlan Macquarie, nudging him towards social reform and magnificent buildings and town planning. The other was Elizabeth Macarthur, credited with creating Australia's wool industry and married to John Macarthur, a dangerous enemy of the establishment.

These women came from strikingly different backgrounds with husbands who held sharply conflicting views. They should have been bitter foes. Elizabeth & Elizabeth is about two courageous women thrown together in impossible times.

Borne out of an overriding admiration for the women of early colonial Australian history, Sue Williams has written a novel of enduring fascination.

'An extraordinary story of female leadership at a time when such a quality was frowned on, and female friendship forged against the odds. Sue Williams' Elizabeth & Elizabeth brings us a nuanced and vivid portrait of the early days of colonisation. More importantly, it delivers a fascinating look into the relationship between two remarkable women.' - Meg Keneally, bestselling author of The Wreck


'A fascinating and evocative story of an enduring friendship between two women who played such an important role in colonial Australia's history.' - Caroline Beecham, author of Finding Eadie
More books by this author

Sue Williams is a bestselling author and award-winning journalist, working in newspapers, magazines and TV in Australia, the UK and New Zealand. Born in England, but settling in Australia in 1989, she's also a travel writer and university lecturer. She lives in Sydney's Kings Cross with her partner, writer Jimmy Thomson.

Her books include Getting There: Journeys of an accidental adventurer; the story of her travels around isolated Australia, Welcome to the Outback; and a series of other books about the outback, Women in the Outback, Outback Spirit and Outback Heroines. She's also written biographies of Father Chris Riley, Mean Streets, Kind Hearts; Father Bob Maguire, Father Bob: The larrikin priest; navy diver Paul de Gelder, No Time For Fear; Fred Brophy, The Last Showman; and Australia's youngest Everest climber Alyssa Azar, The Girl Who Climbed Everest.

Sue's true-crime book And Then The Darkness: The disappearance of Peter Falconio and the trials of Joanne Lees was shortlisted for the international 2006 Gold Dagger Award for the world's best crime non-fiction. Her first children's book was Everest Dreaming.