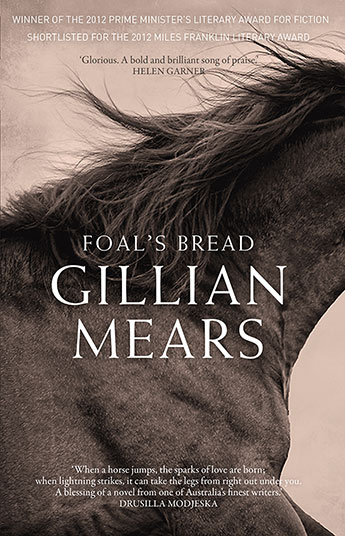 The long-awaited new novel from the award-winning author of The Grass Sister tells the story of two generations of the Nancarrow family and the high-jumping horse circuit prior to the Second World War. A love story of impossible beauty and sadness, it is also a chronicle of dreams 'turned inside out', and miracles that never last, framed against a world both tender and unspeakably hard.

The sound of horses' hooves turns hollow on the farms west of Wirri. If a man can still ride, if he hasn't totally lost the use of his legs, if he hasn't died to the part of his heart that understands such things, then he should go for a gallop. At the very least he should stand at the road by the river imagining that he's pushing a horse up the steep hill that leads to the house on the farm once known as One Tree.

Set in hardscrabble farming country and around the country show high-jumping circuit that prevailed in rural New South Wales prior to the Second World War, Foal's Bread tells the story of two generations of the Nancarrow family and their fortunes as dictated by the vicissitudes of the land.

It is a love story of impossible beauty and sadness, a chronicle of dreams 'turned inside out', and miracles that never last, framed against a world both tender and unspeakably hard. Written in luminous prose and with an aching affinity for the landscape the book describes, Foal's Bread is the work of a born writer at the height of her considerable powers. It is a stunning work of remarkable originality and power, one that confirms Gillian Mears' reputation as one of our most exciting and acclaimed writers.
More books by this author

Winner, 2012 The Age Book of the Year Award Fiction