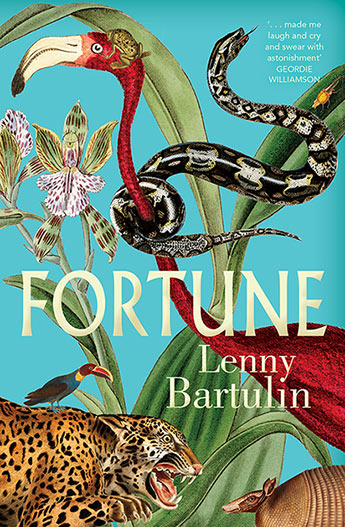 A gripping, globe-spanning historical epic from the author of Infamy

In 1806 Napoleon Bonaparte conquered Prussia. Beginning on the very day he leads his triumphant Grande Armee into Berlin through the Brandenburg Gate, Fortune traces the fates of a handful of souls whose lives briefly touch on that momentous day and then diverge across the globe.

Spanning more than a century, the novel moves from the Napoleonic Wars to South America, and from the early penal settlement of Van Diemen's Land to the cannons of the First World War, mapping the reverberations of history on ordinary people. Some lives are willed into action and others are merely endured, but all are subject to the unpredictable whims of chance. Fortune is a historical novel like no other, a perfect jewel of epic and intense brilliance.

'A thrilling tale of adventure told across centuries and continents…It made me laugh and cry and swear with astonishment. It is savage and nihilistic, wise and kind, never less than gripping, and it is over far sooner than you want it to be. And every line is marked with the author's unmistakable stylistic signature: somewhere between Roger Federer at the net and Mick Jagger's rooster strut.' Geordie Williamson, Chief Literary Critic, The Australian

'In Infamy Lenny Bartulin has written a rip-snorting, swashbuckling Aussie western set in the early part of the nation's history. He evokes the hardness and the grimness of colonial life, taking us through the slums and rum houses, the criminal dens and stinking penal hulks. Bartulin gives a visceral sense of the place, of the heat and isolation that bubbles up through savage drinking binges and dockland murders, whorehouses and massacres. And, via the stories of "Black Betty" and Robert Ringa, Infamy condemns Australia's appalling history of persecuting indigenous people. Bartulin's prose is muscular and evocative and cinematic cuts between plot lines keep the action moving fast throughout. Infamy is an excellent read. It is a book that gets the blood flowing and the fist pounding, and makes you glad you don't live by a dockyard tavern in 1830s Tasmania.' SMH/Age review

'With vivid characters, deep psychological understanding and symphonic plotting, Infamy drew me in so completely that it was a shock to find out that this is a work of the imagination. Bartulin has made fiction stranger, and more compelling, than truth.' Malcolm Knox
More books by this author

Lenny Bartulin's previous novel, Infamy, was longlisted in the 2015 Tasmanian Premier's Literary Awards, for the Tasmania Book Prize and the Margaret Scott Prize. In 2010, the second novel in his Sydney Noir Trilogy, The Black Russian, was shortlisted in the Ned Kelly Awards for Best Novel. He has published poetry and short stories in various journals, including Heat, Meanjin and Island Magazine. He has lived in Sydney and the Blue Mountains, and currently resides in Hobart with his wife and son.