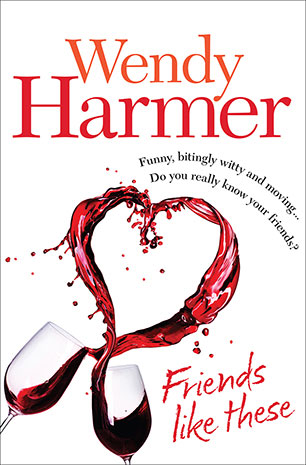 A sparkling novel about friendship, love, betrayal and money - a modern, witty and wise comedy of manners set among the wealthy elite where a glittering harbour view is the ultimate prize.

Greed, fraud, betrayal and resurrection - this is a search for something to believe in. A search that takes us to a baby-naming, a same-sex wedding and a funeral all performed by Jo Blanchard, newly trained civil celebrant.

Jo - recently single, 45-year-old mother of two - is the former deputy headmistress of Sydney's most exclusive private girls' school - Darling Point Ladies College. A year ago she was forced to abandon her post in a scandal that had all the social set talking. In fact, they're still talking.

Jo is moving on - but with friends like hers, maybe leaving them behind is her only option.
More books by this author

Wendy Harmer is Australia's best-known comedienne. She is a mother of two, veteran of countless international comedy festivals and hosted 2DayFM's top-rating Breakfast Show for 11 years. Wendy is also the author of the best-selling Farewell My Ovaries, Love and Punishment and Roadside Sisters as well as two plays, a series of children's book about Pearlie, an urban park fairy, a novel for young adults and the libretto for Lake Lost, a production by Baz Luhrmann for Opera Australia. Wendy has hosted, written and appeared in a wide variety of TV shows including ABC's Big Gig and In Harmer's Way. She has also hosted the Nine Network television Logies and has been a regular newspaper and magazine contributor, writing columns for Australian Women's Weekly and the Sydney Morning Herald's Good Weekend magazine.