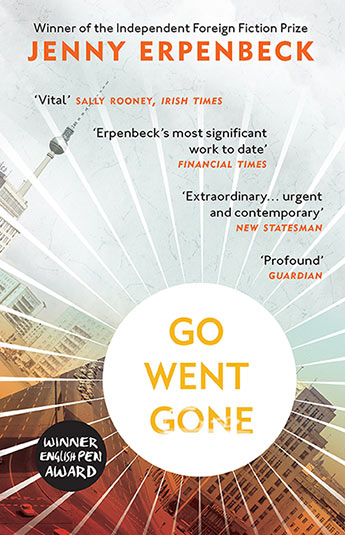 Now in paperback, the unforgettable German bestseller about the European refugee crisis.

Richard has spent his life as a university professor, immersed in the world of books and ideas, but now he is retired, his books remain in their packing boxes and he steps into the streets of his city, Berlin. Here, on Alexanderplatz, he discovers a new community -- a tent city, established by African asylum seekers. Hesitantly, getting to know the new arrivals, Richard finds his life changing, as he begins to question his own sense of belonging in a city that once divided its citizens into them and us.

At once a passionate contribution to the debate on race, privilege and nationality and a beautifully written examination of an ageing man's quest to find meaning in his life, Go, Went, Gone showcases one of the great contemporary European writers at the height of her powers.
More books by this author

Jenny Erpenbeck is the author of The Old Child & The Book of Words (2008), Visitation (2010) and The End of Days (2014, winner of the Independent Foreign Fiction Prize), and Go, Went, Gone (2017), all published by Portobello. Her fiction is published in fourteen languages.

Susan Bernofsky has translated works by Robert Walser, Hermann Hesse, Gregor von Rezzori, Yoko Tawada, Ludwig Harig and Franz Kafka. She is the author of Foreign Words: Translator-Authors in the Age of Goethe and is currently at work on a biography of Robert Walser. Her translation of The Old Child and Other Stories was awarded the 2006 Helen and Kurt Wolff Translator's Prize.