I Dream of Magda 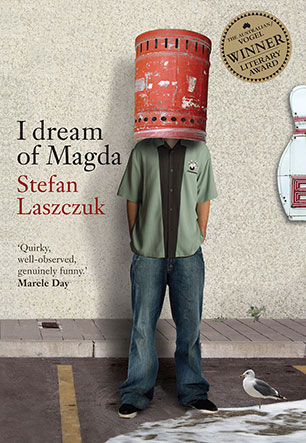 Genuinely engaging, funny and utterly surprising, this novel of brothers, family and loss is the winner of the 2007 The Australian/Vogel Literary Award.

Winner of the Australian/Vogel's Literary Award 2007.

'Happy families are all alike; every unhappy family is unhappy in its own way.'

Tolstoy wasn't thinking specifically of the Harrison family when he wrote those words, but maybe he should have been. George Harrison is twenty-eight and afraid of the dark. His father is dead and his mother lives in la-la land. Reeling from a broken heart, and still coping with the trauma of a childhood home invasion, George works in a dead-end job in a bowling alley and finds rare solace in the giant painting of an alien that sits outside his room. His brother Matthew isn't much better off. After losing the love of his life in a traumatic car accident, he's retreated into a private world of sleep where he dreams about falling in love with comedienne Magda Szubanski.

Matthew and George are each stuck in their own little messed-up world, with no idea how to get out, and neither of them is sure whether their unhappy family will ever finally pull together, or simply just fall apart.

The winner of the 2007 The Australian/Vogel Literary Award, this is a quirky, left-field, yet deeply felt and wholly engaging story of families, love, loss and grieving.
More books by this author

Stefan Laszczuk is currently undertaking a PhD in Creative Writing from the University of Adelaide. His first novel, The Goddamn Bus of Happiness , was the winner of the South Australia Festival of Literature Award for an unpublished manuscript, was published by Wakefield Press in 2004 and praised by The Age as an 'impressive debut'. He currently lives in Melbourne and is a singer in a band.