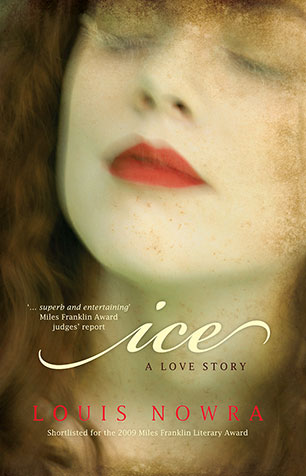 From the Antarctic to Victorian London, the Yorkshire moors to colonial tropical Cairns, to Imperial Japan and to the gritty streets of modern-day Kings Cross, Ice is a novel of hauntings, love, longing, memory and loss, told with audacity and breathtaking imaginative power from one of Australia's most acclaimed writers.

You have possessed me, let me go.

An iceberg is towed through the Heads to the astonishment of colonial Sydney. As it melts, the iceberg is revealed as a tomb to the perfectly preserved body of a young sailor, who died forty years before.

A man lost in grief for his wife is haunted by his memories of her. His life becomes a memorial to her, in the hope of defeating the oblivion of death.

Ice tells the story of Malcolm McEacharn, the man who brings joy to early Sydney in the form of an iceberg and who later pioneers the first successful refrigerated voyage from Australia to London. He is a brilliant businessman who will later bring electricity to Melbourne, become its Lord Mayor and be one step away from becoming Prime Minister - but he is driven by an obsession that threatens to destroy him and his world.

Ice also tells a parallel story, set in contemporary Sydney, of a young biographer who lies in a coma, and her bereft husband's desperate attempts to resurrect her by unearthing the truth about her subject McEacharn.

Both stories are redolent with longing, suffused by regret, illuminated by extraordinary imagery, hypnotic language and the spectre of suspended life in the 'mythical country of ice'. From the frozen, desolate Antarctic to bustling Victorian London, from the Yorkshire moors to colonial tropical Cairns, to Imperial Japan and to the gritty streets of modern-day Kings Cross, Ice walks the line between life and death, fact and fantasy, grief and madness. It is a book about the power of love, told with audacity and breathtaking imaginative power. It will never let you go.

'Nowra builds and twists his story most dexterously, doubling forwards and backwards. Global warming may mean lots more icebergs drift into Sydney Harbour, but none will bear the same, singular literary pleasure which Ice does.' Canberra Times

'Behind the writing lies magic realism. Australia is seen in ways you wouldn't previously have thought of seeing it. These perspectives replay to us the way this exotic colony was seen from the outside. Gabriel Garcia Maquez's One Hundred Years of Solitude is never far from the spirit of this book . Nowra has produced a Ripley's Believe It Or Not narrative where the reader gets caught among the layers of believability on the surface, gets sucked down into the labyrinth of motivations and consequences beneath, and becomes obsessed with the profound, taboo and romantic mysteries the novel embraces in its depths' Weekend Australian
More books by this author

Louis Nowra is an acclaimed author, screenwriter and playwright who lives in Sydney. His novels include The Misery of Beauty, Palu, Abaza, Red Nights and the Twelfth of Never. His plays include Cosi, Summer of the Aliens, The Golden Age, Radiance and The Boyce Trilogy. Ice was shortlisted for the 2009 Miles Franklin Award.