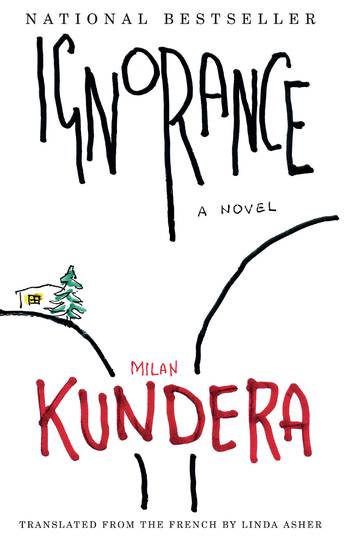 Ignorance by Milan Kundera is a literary masterpiece set in contemporary Prague, from the hugely acclaimed Czech novelist and author of The Unbearable Lightness of Being.

In Ignorance, set in contemporary Prague, one of the most distinguished writers of our time takes up the complex and emotionally charged theme of exile and creates from it a literary masterpiece.

A man and a woman meet by chance while returning to their homeland, which they had abandoned twenty years earlier when they chose to become exiles. Will they manage to pick up the thread of their strange love story, interrupted almost as soon as it began and then lost in the tides of history? The truth is that after such a long absence 'their memories no longer match.' We always believe that our memories coincide with those of the person we loved, that we experienced the same thing. But this is just an illusion as the memory records only 'an insignificant, minuscule particle' of the past, 'and no one knows why it's this bit and not any other bit.' We live our lives sunk in a vast forgetting, and we refuse to see it. Only those who return after twenty years, like Ulysses returning to his native Ithaca, can be dazzled and astounded by observing the goddess of ignorance first-hand. Milan Kundera has taken these dizzying concepts of absence, memory, forgetting, and ignorance, and transformed them into material for a novel, masterfully orchestrating them into a polyphonic and moving work.
More books by this author