Home>Browse>Books>Fiction>In the Country of Last Things

In the Country of Last Things 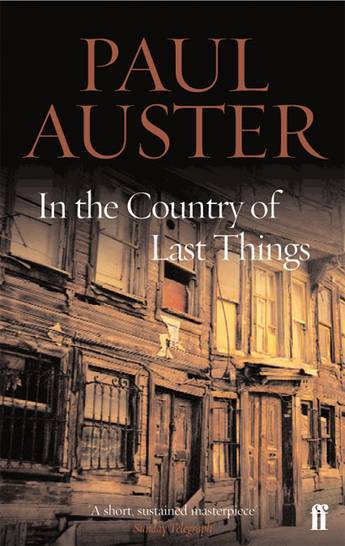 Paul Auster takes us to an unspecified and devastated world in which the self disappears amidst horrors that surround us.

'That is how it works in the City. Every time you think you know the answer to a question, you discover that the question makes no sense '

This is the story of Anna Blume and her journey to find her lost brother, William, in the unnamed City. Like the City itself, however, it is a journey that is doomed, and so all that is left is Anna's written account of what happened.

For In the Country of Last Things, Paul Auster takes us to an unspecified and devastated world in which the self disappears amidst the horrors that surround it. But this is not just an imaginary, futuristic world, it is a world that echoes our own, and in doing so addresses some of our darker legacies.

Paul Auster was born in Newark, New Jersey in the United States in 1947. He graduated from Columbia University with an MA degree. In 1970 he worked as a merchant seaman on an Esso oil tanker. From 1971 to 1974 he lived in France, spending two years in Paris and one in Provence. After returning to New York in 1974, he began his writing career.Throughout the 1970s he wrote mainly poetry and essays which appeared in various magazines including the New York Review of Books. During the 1980s he concentrated on prose writing: a memoir and four novels were published.His screenplay Smoke and Blue in the Face was published in April 1996 to coincide with the release of the film, and in 1999 Faber published the screenplay Lulu on the Bridge. The Art of Hunger (a collection of essays, interviews and prose) and his Selected Poems were published in November 1998.He is the author of nine novels, including The New York Trilogy