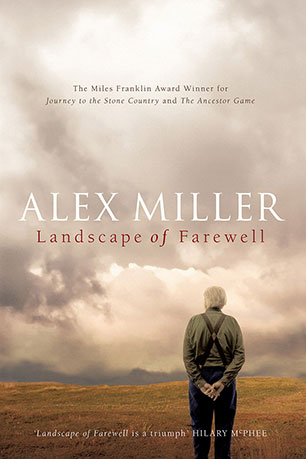 'Is it history that tells us who we are? Or is it the story we tell ourselves . that defines who we are?' (The Australian) A profound and moving story about the land, the past, exile and acceptance from the award-winning author of Journey to the Stone Country.

A hauntingly beautiful meditation on the land, the past, exile and friendship, Landscape of Farewell is the powerful new novel from acclaimed Australian author, Alex Miller.

It is the story of Max Otto, an elderly German academic. After the death of his much-loved wife and his recognition that he will never write the great study of history that was to be his life's crowning work, Max believes his life is all but over. Everything changes, though, when his valedictory lecture is challenged by Professor Vita McLelland, a feisty young Australian Aboriginal academic visiting Germany. Their meeting and growing friendship sets Max on a journey that would have seemed unthinkable just a few short weeks earlier.

When, at Vita's invitation, Max travels to Australia, he forms a deep friendship with her uncle, Aboriginal elder Dougald Gnapun. It is a friendship that not only gives new meaning and purpose to Max, but which teaches him the profound importance of truth-telling in reconciliation with his own and his country's past.

Following Alex Miller's Miles Franklin-winning Journey to the Stone Country, Landscape of Farewell is a wise and grave novel of power, beauty and truth.

'[The Ancestor Game] is a wonderful novel of stunning intricacy and great beauty.' - Michael Ondaatje

'Miller is a master storyteller.' - Drusilla Modjeska
More books by this author