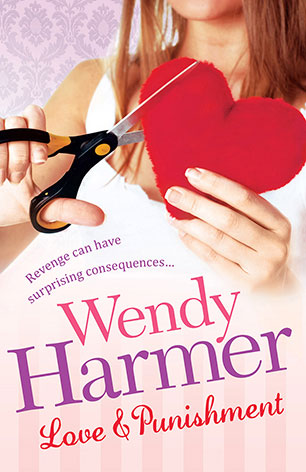 A fast, poignant and funny novel about life, love and a very sharp pair of scissors from Australia's favourite comedienne, Wendy Harmer.

'Love and Punishment' is the deluxe triple chocolate fudge bar of the genre - great flavour, memorable aftertaste and impossible to put down until you've gorged the lot.' Courier Mail

Francie writes the 'Seriously Single' column for the Sunday Press. Nick - the man she thought she'd spend the rest of her life with - has dumped her for an older woman. To say that Francie is annoyed would be a serious understatement. Struggling to deal with the bleak landscape of her new life, Francie signs up for therapy and moves into a shared household with a trio of supposedly swingin' singles. But Francie has a secret. A dirty little secret of nasty revenge. Her nightmare is that one day all will be revealed.

That couldn't happen . could it?

' . it's the poignancy and raw, close-to-the-bone writing about having a broken heart that lends depth and humanity to Wendy Harmer's latest novel and makes it such a good one.' - Australian Women's Weekly
More books by this author

Wendy Harmer is Australia's best-known comedienne. She is a mother of two, veteran of countless international comedy festivals and hosted 2DayFM's top-rating Breakfast Show for 11 years. Wendy is also the author of three books for adults, including the best-selling Farewell My Ovaries (Allen + Unwin 2005) and Love and Punishment (Allen + Unwin, 2006) as well as two plays, a series of children's book about Pearlie, an urban park fairy, and the libretto for Lake Lost, a production by Baz Luhrmann for Opera Australia. Wendy has hosted, written and appeared in a wide variety of TV shows including ABC's Big Gig and In Harmer's Way. She has also hosted the Nine Network television Logies and has been a regular newspaper and magazine contributor, writing columns for Australian Women's Weekly and the Sydney Morning Herald's Good Weekend magazine.