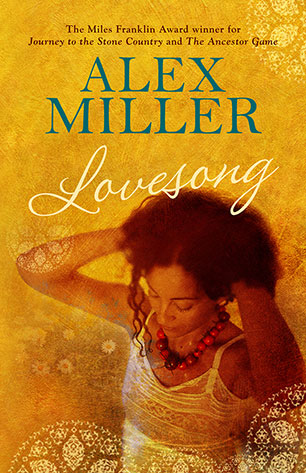 Seeking shelter in a Parisian cafe from a sudden rainstorm, John Patterner meets the exotic Sabiha and his carefully mapped life changes forever. Alex Miller's brilliantly realised, multi-award winning novel tells the deeply moving story of their lives together, and of how each came undone by desire. Now in paperback.

Strangers did not, as a rule, find their way to Chez Dom, a small Tunisian cafe in Paris. Run by the widow Houria and her young niece, Sabiha, the cafe offers a home away from home for the North African immigrant workers at the great abattoirs of Vaugirard who, as with Houria and Sabiha themselves, have grown used to the smell of blood in the air. When one day a lost Australian tourist, John Patterner, seeks shelter in the cafe from a sudden Parisian rainstorm, a tragic love story begins to unfold.

Years later, while living a quiet life in suburban Melbourne, John Patterner is haunted by what happened to him and Sabiha at Vaugirard. He confides his story to Ken, an ageing writer, who sees in John's account the possibility for one last simple love story. When Ken tells his daughter this she reminds him, 'Love is never simple, Dad. You should know that.' He does know it. But being the writer he is, he cannot resist the lure of the story.

Told with all Miller's distinctive clarity, intelligence and compassion, Lovesong is a pitch-perfect novel, a tender and enthralling story about the intimate lives of ordinary people. Like the truly great novelist he is, Miller locates the heart of his story in the moral frailties and secret passions of his all-too-human characters.
More books by this author

Alex Miller is twice winner of Australia's premier literary prize, The Miles Franklin Literary Award, first in 1993 for The Ancestor Game and again in 2003 for Journey to the Stone Country. He is also an overall winner of the Commonwealth Writers' Prize, in 1993 for The Ancestor Game. His fifth novel, Conditions of Faith, won the Christina Stead Prize for Fiction in the 2001 New South Wales Premier's Awards. In 2011 he won this award a second time with his most recent novel Lovesong. Lovesong also won the People's Choice Award in the NSW Premier's Awards, the Age Book of the Year Award and the Age Fiction Prize for 2011. In 2007 Landscape of Farewell was published to wide critical acclaim and in 2008 won the Chinese Annual Foreign Novels 21st Century Award for Best Novel and the Manning Clark Medal for an outstanding contribution to Australian cultural life. It was also shortlisted for the Miles Franklin Award, the Christina Stead Prize for Fiction, the ALS Gold Medal and the Commonwealth Writers' Prize. Alex is published internationally and widely in translation. Autumn Laing, his tenth novel was published in October 2011 to stunning critical acclaim.