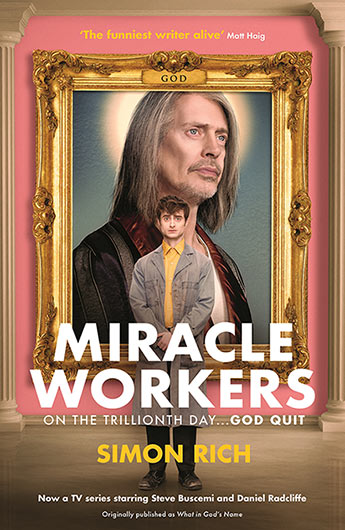 How can you help mankind, when they won't help themselves? Welcome to Heaven Inc, and Craig's life.

From the Sunsets Department and Geyser Regulation to the Department of Miracles, Heaven Inc has the earth covered. Unless someone is away from their desk. And these days, the CEO is kind of disillusioned.

God knows he should be keeping an eye on the bad things happening on Earth, but instead he finds himself watching the Church channels on satellite TV. His first priority is the team of angels he's asked to get Lynyrd Skynyrd back together.

Downstairs on the office floor, Eliza has been promoted from the Prayers Department to Miracles, and Craig, the only other workaholic in heaven, has to show her around. Eliza is shocked by the casual attitude of many of the angels in her new department. And she's furious when she discovers that God has never looked at, let alone answered, a single prayer.

So she storms into God's office and asks Him a question that no one has ever dared to ask before. And it might just be the end of the world.
More books by this author More books in this series

Simon Rich is a graduate of Harvard University, where he was president of The Harvard Lampoon. Shortly after graduation he became a writer for Saturday Night Live. He worked on Inside Out for Pixar and is currently writing and producing the hit comedy Man Seeking Woman. He lives in New York City.