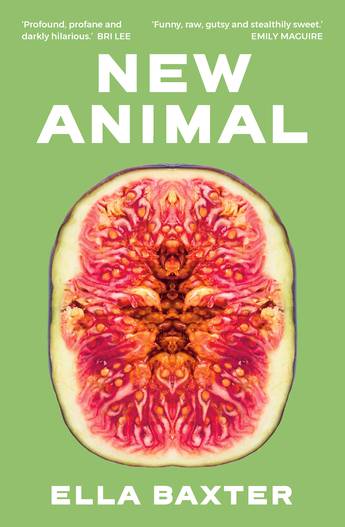 … most nights I find myself trying to combine with someone else to become this two-headed thing with flailing limbs, chomping teeth, and tangled hair. This new animal. I am medicated by another body. Drunk on warm skin. Dumbly high on the damp friction between them and me.

It's not easy getting close to people. Amelia's meeting a lot of men but once she gets the sex she wants from them, that's it for her; she can't connect further. A terrible thing happened to Daniel last year and it's stuck inside Amelia ever since, making her stuck too.

Maybe being a cosmetician at her family's mortuary business isn't the best job for a young woman. It's not helping her social life. She loves her job, but she's not great at much else. Especially emotion.

And then something happens to her mum and suddenly Amelia's got too many feelings and the only thing that makes any sense to her is running away.

'New Animal is a wild, moving and original debut - and like the best bits of sex and funerals, it's very, very funny.' - Robert Lukins
'Sex, death, humour, and heart - this novel has it all.' - Laura Elizabeth Woollett
'. . . deeply uncomfortable, laugh-out-loud funny and devastatingly moving . . .' - Erin Hortle
More books by this author

Ella Baxter is a writer and artist living on unceded land of the Wurundjeri people. She has had poetry published in Spineless Wonders, Gargouille Literary Journal, and Bowen St Press. Her sculptures have been exhibited in site specific locations around Victoria, as well as at Gasworks Arts Park, and featured in Beyond Words Literary Magazine. In her spare time she runs a small business making bespoke death shrouds. Her debut novel, New Animal, will be released through Allen and Unwin in 2021. She is currently writing her second novel, Woo Woo.