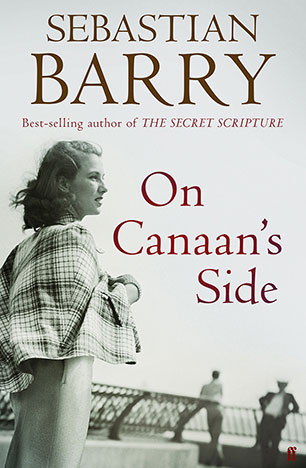 As they used to say in Ireland, the devil only comes into good things.

Narrated by Lilly Bere, On Canaan's Side opens as she mourns the loss of her grandson, Bill. The story then goes back to the moment she was forced to flee Dublin, at the end of the First World War, and follows her life through into the new world of America, a world filled with both hope and danger.

At once epic and intimate, Lilly's narrative unfurls as she tries to make sense of the sorrows and troubles of her life and of the people whose lives she has touched. Spanning nearly seven decades, it is a novel of memory, war, family-ties and love, which once again displays Sebastian Barry's exquisite prose and gift for storytelling.
More books by this author

Sebastian Barry was born in Dublin in 1955. He has written numerous plays including Grady's Boys (1988) and The Pride of Parnell Street (2007). His novels include The Whereabouts of Eneas McNulty (1998), Annie Dunne (2002), A Long Long Way (2005) and The Secret Scripture (2008). A Long Long Way, which was also shortlisted for the Man Booker Prize and the Dublin International Impac Prize, was the Dublin: One City One Book choice for 2007. The Secret Scripture won the Costa Book of the Year award, the Irish Book Awards Best Novel and the James Tait Black Memorial Prize. It was also shortlisted for the Man Booker Prize. He lives in Wicklow with his wife and three children.