Only Americans Burn in Hell 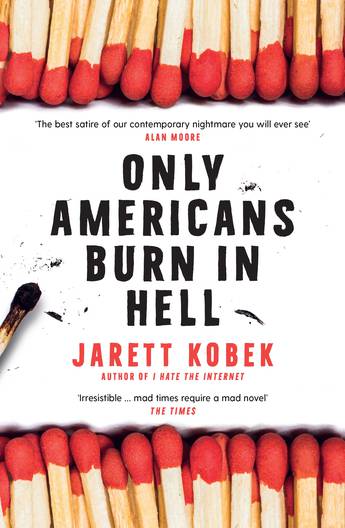 A despairingly hilarious satire of the modern world, from #MeToo to Trump, by the bestselling author of I Hate the Internet.

'Brilliantly funny ... the best satire of our contemporary nightmare that you will ever see, and very possibly the last' - Alan Moore

It's 2019 and America is ruled over by a billionaire reality TV star. Its media is owned by a transnational class of the shameless and the depraved. And its people have been silently robbed of their wealth, their dignity and their democracy.

In this brave new world, going to see a superhero movie counts as activism, and arguing with the other serfs on social media is political engagement. BUT EVERYTHING'S FINE - as long as you never, ever ask yourself who makes money from the ticket sales and the ratings, or who owns Twitter.

It's 2019 and Jarett Kobek has done the only thing a dissident American novelist can do in those circumstances: he's joined the party and written fantasy novel about an immortal fairy queen and a shadowy billionaire philanthropist sheikh called Dennis.

Hilarious, provocative and unmissable, Only Americans Burn in Hell is the only novel for our certifiably insane times.
More books by this author

Jarett Kobek is a Turkish-American writer living in California. His novella ATTA, a psychedelic biography of the 9/11 bomber Mohamed Atta, was an unexplained bestseller in parts of Canada. His first novel, I Hate the Internet, was a bestseller everywhere, doing especially well in Serbia. His second novel, The Future Won't Be Long, wasn't a bestseller anywhere, but was published in the United States by a company that printed propaganda for Nazi Germany. So there's always hope.