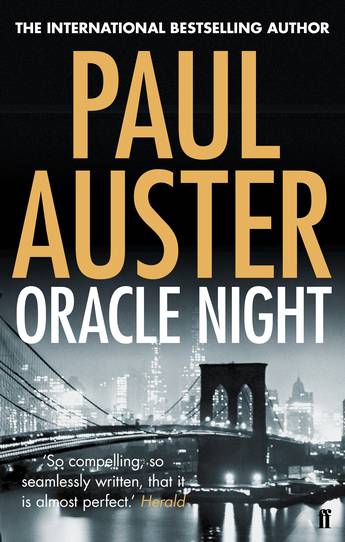 The discovery of a mysterious notebook turns a man's life upside-down in this compulsively readable novel.

Several months into his recovery from a near-fatal illness, novelist Sidney Orr enters a stationary shop in Brooklyn and buys a blue notebook. It is September 18, 1982, and for the next nine days Orr will live under the spell of this blank book, trapped inside a world of eerie premonitions and bewildering events that threaten to destroy his marriage and undermine his faith in reality.

Paul Auster's mesmerising eleventh novel reads like an old-fashioned ghost story. But there are no ghosts in this book - only flesh-and-blood human beings, wandering through the haunted realms of everyday life.

Oracle Night is a narrative tour de force that confirms Auster's reputation as one of the boldest, most original writers at work in America today.
More books by this author

Paul Auster is the best-selling author of Invisible, Man in the Dark, The Brooklyn Follies, The Book of Illusions, The New York Trilogy, among many other works. In 2006 he was awarded the Prince of Asturias Prize for Literature and inducted into the American Academy of Arts and Letters. He has also been short-listed for both the International IMPAC Dublin Literary Award (The Book of Illusions) and the PEN/Faulkner Award for Fiction (The Music of Chance). His work has been translated into more than thirty languages.