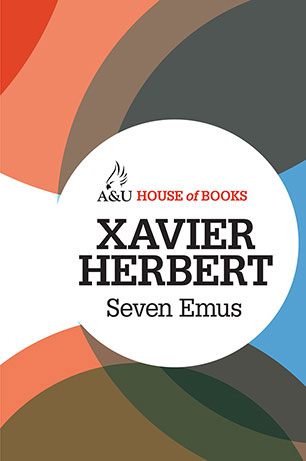 Bronco Jones, part-Aboriginal owner of Emu Station in the north of Western Australia, struggles against the machinations of a businessman and an anthropologist in this satirical portrait of anthropological exploitation of Aboriginal sacred sites.

Seven Emus Station lies in the wild, red sandstone country back of the north-west port of Dampier. It is the prized property of Bronco Jones, his wife Possum and their bright, honey-coloured brood.

The wealth of the property lures Appleby Gaunt, 'The Baron' who sweeps Bronco into a series of ruinous financial deals.

Goborrow, a second-rate anthropologist, seizes the predicament as a means to boost his own credibility, with disastrous results for himself and 'The Baron'.

An experimental novella, Seven Emus deals with issues of identity, ancestral fidelity and the misguided appropriation of cultural artefacts.

Xavier Herbert was one of Australia's leading writers. In 1938 he published his award-winning first novel Capricornia. Herbert's next major work of fiction, Soldiers' Women, was published in 1962. A collection of short stories, Larger Than Life, and Disturbing Element, an autobiography, were both published in 1963. He is perhaps best remembered for his Miles Franklin-winning book Poor Fellow My Country. Published in 1975, this magnificent epic deals with themes of illegitimacy, Australia's postcolonial beginnings and its relationship to Britain, and the terrible treatment and exploitation of the indigenous population.

Known for his insight into, and articulation of, a particularly Australian experience Herbert's writing encompasses complex psychological, historical, social and racial landscapes. He died in 1984.