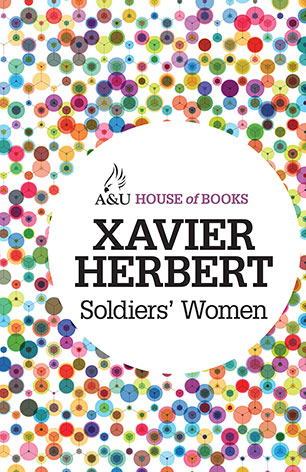 Xavier Herbert's study of women liberated by the absence or relative scarcity of men during World War II.

For the soldiers' women in Sydney, life takes on a brittle gaiety as their husbands and lovers leave for the war and transient G.I.s take their place. The American troops are the centre of glamour and excitement in this Australian city in the 1940s and Ida, Rosa, Fay and Patricia are determined to join their fun. Inhibitions are abandoned in an urgent and frenzied desire to enjoy all that the city and soldiers have to offer.
More books by this author

Xavier Herbert was one of Australia's leading writers. In 1938 he published his award-winning first novel Capricornia. Herbert's next major work of fiction, Soldiers' Women, was published in 1962. A collection of short stories, Larger Than Life, and Disturbing Element, an autobiography, were both published in 1963. He is perhaps best remembered for his Miles Franklin-winning book Poor Fellow My Country. Published in 1975, this magnificent epic deals with themes of illegitimacy, Australia's postcolonial beginnings and its relationship to Britain, and the terrible treatment and exploitation of the indigenous population.

Known for his insight into, and articulation of, a particularly Australian experience Herbert's writing encompasses complex psychological, historical, social and racial landscapes. He died in 1984.