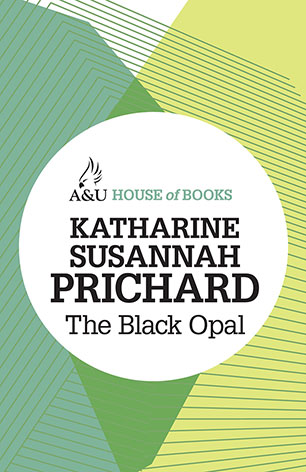 The first of Katharine Susannah Prichard's mining novels, Black Opal is considered one of her earliest important novels.

The Black Opal is a tender story of the highs and lows of a close-knit community of opal-miners. The men and women of Fallen Star Ridge - Potch, Michael, Sophie, Snow-Shoes - love their land and cherish their freedom, until a wealthy buyer arrives in town with an offer seemingly too lucrative to refuse and they are tempted to relinquish their independence.

Though bound by a promise to her mother to never leave the Ridge, Sophie departs for New York, only to find that she can't stay away from her home. Throughout the novel, the irrepressible love she bears for her ill-matched soul mate, Arthur Henty, threatens to overturn both their lives.

Katharine Susannah Prichard wrote The Black Opal, her third novel, after spending some months at Lightning Ridge. It is a moving story, infused with the magic of that most mysterious and striking of all gems - a symbol of Australia - the opal. It involves thoroughly memorable characters whose humour, courage and passion shine in an awesome landscape.

Whether she is writing of the place, its people or the fight for an ideal, she writes with great love for her subject, which makes The Black Opal one of Katharine Susannah Prichard's most powerful books.
More books by this author

Katharine Susannah Prichard was born in 1883 in Fiji. Her family moved to Australia in 1886, and she spent her childhood in Melbourne and Launceston.

Prichard worked as a journalist and travelled to London, where the appalling gulf between poverty and plenty affected her deeply, sowing the seeds for her later commitment to spending her life fighting for a fairer world. In 1915 her first published novel, The Pioneers, won the Hodder & Stoughton All Empire Novel Competition, which enabled her return to Australia to write 'about Australia and the realities of life for the Australian people'.

In 1919 she married war veteran Hugo Throssell VC and they moved to Perth, where their son, Ric Throssell, was born in 1922.

Prichard is the author of thirteen novels, among them Working Bullocks (1926), Coonardoo (1929), Haxby's Circus (1930) and Golden Miles (1948). She was a foundation member of The Australian Communist Party, and remained a committed member until her death in 1969, aged eighty-six.