The Book of Illusions 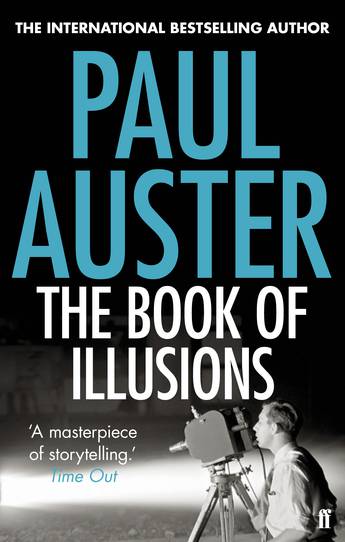 Written with breath-taking urgency and precision, this stunning novel plunges the reader into a universe in which the comic and the tragedy, the real and the imagined, the violent and the tender dissolve into one another.

One man's obsession with the mysterious life of a silent film star takes him on a journey into a shadow-world of lies, illusions, and unexpected love. After losing his wife and young sons in a plane crash, Vermont professor David Zimmer spends his waking hours mired in grief. Then, watching television one night, he stumbles upon a lost film by silent comedian Hector Mann, and remembers how to laugh .

Mann was a comic genius, in trademark white suit and fluttering black moustache. But one morning in 1929 he walked out of his house and was never heard from again. Zimmer's obsession with Mann drives him to publish a study of his work; whereupon he receives a letter postmarked New Mexico, supposedly written by Mann's wife, and inviting him to visit the great Mann himself. Can Hector Mann be alive? Zimmer cannot decide - until a strange woman appears on his doorstep and makes the decision for him, changing his life forever.

Written with breath-taking urgency and precision, this stunning novel plunges the reader into a universe in which the comic and the tragic, the real and the imagined, the violent and the tender dissolve into one another.
More books by this author

Paul Auster is the best-selling author of Invisible, Man in the Dark, The Brooklyn Follies, The Book of Illusions, The New York Trilogy, among many other works. In 2006 he was awarded the Prince of Asturias Prize for Literature and inducted into the American Academy of Arts and Letters. He has also been short-listed for both the International IMPAC Dublin Literary Award (The Book of Illusions) and the PEN/Faulkner Award for Fiction (The Music of Chance). His work has been translated into more than thirty languages.