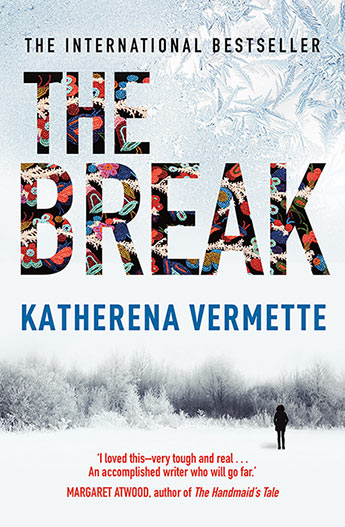 A stunning and multiple prize-winning first novel by a First Nations Canadian writer who is being acclaimed around the world.

Stella, a young Metis mother, lives with her family by the Break, an isolated strip of land on the edge of their small Canadian town. Glancing out of her window one winter's evening Stella spots someone in trouble; horrified, she calls the police. But when they arrive, no one is there, scuff marks in the compacted snow the only sign anything may have happened.

What follows is a heartbreaking and powerful tale of a community in crisis as the people connected to the victim, a young girl on the edge of a precipice, begin to lay bare their stories leading up to that fateful night. Lou is a social worker grappling with the end of a relationship. Cheryl, an artist, mourns the premature death of her sister. Phoenix, a homeless teenager, is released from a youth detention centre with no one to turn to. Officer Scott is a Metis policeman caught between two worlds.

A powerful family saga, Katherena Vermette's urgent, acclaimed and multi-award-winning novel shines a light on the fear every woman carries within her- fear of male power and violence and on the love and empathy shared by all women.

'I loved this - very tough and real.' Margaret Atwood

'Katherena Vermette is a tremendously gifted writer, a dazzling talent . . . The lives of the girls and women in The Break are not easy, but their voices are complex, urgent and unsparing. Vermette lays bare what it means to survive, not only once, but multiple times, against the forces of private and national histories.' Madeleine Thien, author of Do Not Say We Have Nothing

'Vermette is a staggering talent. Reading The Break is like a revelation; stunning, heartbreaking and glorious. From her exquisitely rendered characters to her fully realized world and the ratcheting tension, I couldn't put it down. Absolutely riveting.' Eden Robinson, author of Monkey Beach
More books by this author

KATHERENA VERMETTE is a Metis writer from Treaty One territory, the heart of the Metis nation, Winnipeg, Manitoba, Canada. Her first book, North End Love Songs (The Muses Company) won the Governor General's Literary Award for Poetry. Her National Film Board short documentary, this river, won the Coup de Coeur at the Montreal First Peoples Festival and the 2017 Canadian Screen Award for Best Short.

The Break, her first novel, was bestseller in Canada and won the Amazon.ca First Novel Award, the McNally Robinson Book of the Year Award, the Margaret Laurence Award for Fiction, and the Carol Shields Winnipeg Book Award. The Break was also shortlisted for a Governor General's Literary Award, the Rogers Writers' Trust Fiction Prize and was a 2017 Canada Reads finalist.

The Break Chapter Sampler by Allen & Unwin on Scribd