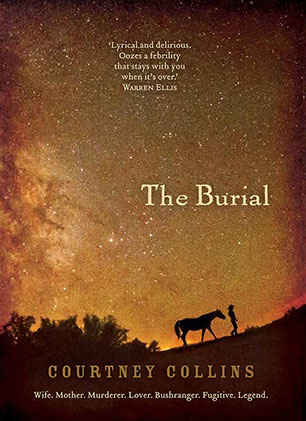 'This extraordinary novel-propelled by the dark, rich talents of a truly brilliant writer-dazzles, staggers and amazes.' Elizabeth Gilbert, author of Eat, Pray, Love

It is the dawn of the twentieth century in Australia and a woman has done an unspeakable thing.

Twenty-two-year-old Jessie has served a two-year sentence for horse rustling. As a condition of her release she is apprenticed to Fitzgerald 'Fitz' Henry, who wants a woman to allay his loneliness in a valley populated by embittered ex-soldiers. Fitz wastes no time in blackmailing Jessie and involving her in his business of horse rustling and cattle duffing.

When Fitz is wounded in an accident he hires Aboriginal stockman, Jack Brown, to steal horses with Jessie. Soon both Jack Brown and Jessie are struggling against the oppressive and deadening grip of Fitz.

Inspired by the life of Jessie Hickman, legendary twentieth-century bushranger, The Burial is a stunning debut novel, a work of haunting originality and power.
More books by this author

The Burial is the debut novel of Courtney Collins. It has been optioned for a feature film by Renegade Films. Courtney's next work in progress, The Walkman Mix has already received attention through the Melbourne Lord Mayor's Creative Writing Award 2011. Courtney grew up in the Hunter Valley in NSW. She now lives on the Goulburn River in regional Victoria.