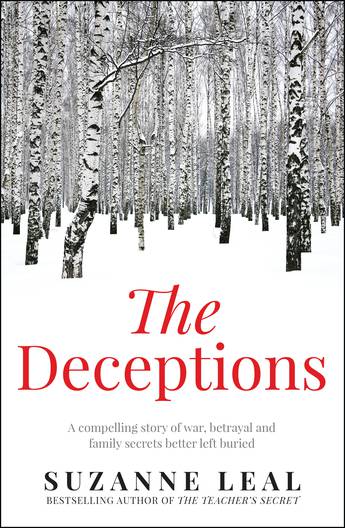 Long-buried family secrets surface in a compelling new novel from the author of The Teacher's Secret.

Moving from wartime Europe to modern day Australia, The Deceptions is a powerful story of old transgressions, unexpected revelations and the legacy of lives built on lies and deceit.

Prague, 1943. Taken from her home in Prague, Hana Lederova finds herself imprisoned in the Jewish ghetto of Theresienstadt, where she is forced to endure appalling deprivation and the imminent threat of transportation to the east. When she attracts the attention of the Czech gendarme who becomes her guard, Hana reluctantly accepts his advances, hoping for the protection she so desperately needs.

Sydney, 2010. Manipulated into a liaison with her married boss, Tessa knows she needs to end it, but how? Tessa's grandmother, Irena, also has something to hide. Harkening back to the Second World War, hers is a carefully kept secret that, if revealed, would send shockwaves well beyond her own fractured family.

Inspired by a true story of wartime betrayal, The Deceptions is a searing, compassionate tale of love and duplicity-and family secrets better left buried.

'The Deceptions is a stunning example of the way fiction tells war better than any other form - I could taste its madness, its horror. Saw from the outside, its utter absurdity. For days after reading the novel I found myself wrestling with the price of betrayal, and the value of truth.' - Sofie Laguna, winner of the Miles Franklin Literary Award

'At what cost can a survivor of hell rebuild a seemingly normal life? The Deceptions is a gripping and tragic story for our times.' - Leah Kaminsky, author of The Hollow Bones

'Impossible to put down. Leal is a master storyteller. Mesmerising, heartbreaking, honest-The Deceptions is ferociously good.' - Nikki Gemmell, author of After

'Those who grew up in the shadow of the Second World War had Elie Wiesel's Night to define for them the enormity for the Holocaust. Those who were born later can now rely upon Suzanne Leal's brilliant and confronting novel The Deceptions to open their eyes to the true horrors of Nazism.' - Alan Gold, author of Bloodline
More books by this author

SUZANNE LEAL is the bestselling author of The Teacher's Secret and Border Street. A regular interviewer and presenter at literary events and festivals, she was the senior judge for the NSW Premier's Literary Awards from 2017 to 2019. Suzanne is also a lawyer experienced in child protection, criminal law and refugee law. She lives in Sydney with her husband and four children. www.suzanneleal.com

The Deceptions Chapter Sampler by Allen & Unwin on Scribd