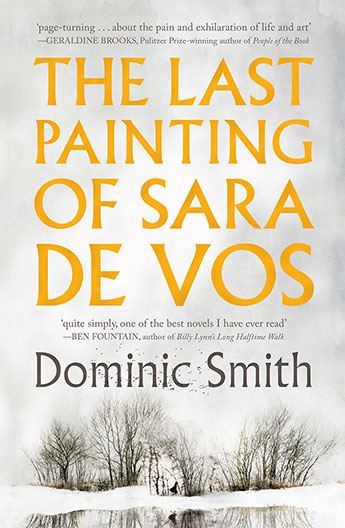 A dazzling and mesmerising story that charts the collision course between a rare landscape by a female Dutch painter of the golden age, an inheritor of the work in 1950s Manhattan, and a celebrated art historian who painted a forgery of it in her youth. A literary novel of breathtaking scope, ambition and achievement.

'Highly evocative of time and place, this stunning novel explores a triumvirate of fate, choice and consequence, and is worthy of comparison to Tracy Chevalier's Girl with a Pearl Earring and Donna Tartt's The Goldfinch . . . A masterly, multilayered story that will dazzle readers.' Library Journal

This is what we long for: the profound pleasure of being swept into vivid new worlds, worlds peopled by characters so intriguing and real that we can't shake them, even long after the reading's done. In this extraordinary novel, The Last Painting of Sara de Vos, Australian writer Dominic Smith brilliantly bridges the historical and the contemporary, tracking a collision course between a rare landscape by a female Dutch painter of the Golden Age, an inheritor of the work in 1950s Manhattan, and a celebrated Australian art historian who painted a forgery of it in her youth.

In 1631, Sara de Vos is admitted to the Guild of St. Luke in Holland as a master painter, the first woman to be so honoured. Three hundred years later, only one work attributed to de Vos is known to remain-a haunting winter scene, At the Edge of a Wood, which hangs over the Manhattan bed of a wealthy descendant of the original owner. An Australian grad student, Ellie Shipley, struggling to stay afloat in New York, agrees to paint a forgery of the landscape, a decision that will haunt her. Because now, half a century later, she's curating an exhibition of female Dutch painters, and both versions threaten to arrive.

As the three threads intersect with increasing and exquisite suspense, The Last Painting of Sara de Vos mesmerises while it grapples with the demands of the artistic life, showing how the deceits of the past can forge the present.
More books by this author

Dominic Smith is the author of three previously published novels from Atria. His awards include a Dobie Paisano Fellowship, the Sherwood Anderson Fiction Prize, the Gulf Coast Fiction Prize, and a new works grant from the Literature Board of the Australia Council for the Arts. His debut novel, The Mercury Visions of Louis Daguerre, was a Barnes & Noble Discover New Writers Book, and received the Turner Prize for First Fiction from the Texas Institute of Letters. His second novel, The Beautiful Miscellaneous, was a Booklist Editors' Choice and optioned for film by Southpaw Entertainment. His most recent novel, Bright and Distant Shores, was named by Kirkus as one of the 'Best Books of 2011' and chosen by the ALA for its annual reading list. In Australia, he was shortlisted for the Age Book of the Year and the Victorian Premier's Prize for Fiction. His fiction has appeared in numerous journals and magazines, including The Atlantic Monthly.

'Forgeries and Figments' - Dominic Smith on the art of forgery