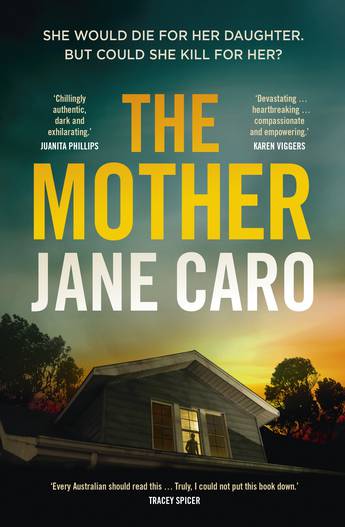 From the Walkley Award winning journalist, social commentator and author comes a gripping domestic thriller with a moral dilemma at its core.

'A timely, tense and important story that takes you to the heart of a toxic relationship, fighting to get free.' Michael Robotham

Just like the garden, the fuse box, the bills, bin night and blown light bulbs, this was just something else she'd now have to take care of herself.

Recently widowed, Miriam Duffy is a respectable North Shore real estate agent and devoted mother and grandmother. She was thrilled when her younger daughter Ally married her true love, but as time goes by Miriam wonders whether all is well with Ally, as she moves to the country and gradually withdraws, finding excuses every time Miriam offers to visit. Their relationship has always had its ups and downs, and Miriam tries to give her daughter the distance she so clearly wants. But is all as it seems?

When the truth of her daughter's situation is revealed, Miriam watches in disbelief as Ally and her children find themselves increasingly vulnerable and cut off from the world. As the situation escalates and the law proves incapable of protecting them, Miriam is faced with an unthinkable decision. But she will do anything for the people she loves most in the world. Wouldn't you?

'The vivid and gripping tale of a young family in danger and the mother who will do anything to save them. I couldn't put it down. Passionate, vivid and unsettling, this heart-stopping tale had me transfixed.' Suzanne Leal, author of The Teacher's Secret
More books by this author

Jane appears frequently on Q&A, The Drum and Sunrise. She has created and presented five documentary series for ABC's Compass, airing in 2015, 2016, 2017, 2018 and 2019. She and Catherine Fox present a popular podcast with Podcast One, Austereo 'Women With Clout'. She writes regular columns in Sunday Life.

She has published twelve books, including Just a Girl, Just a Queen and Just Flesh & Blood, a young adult trilogy about the life of Elizabeth Tudor, and the memoir Plain Speaking Jane. She created and edited Unbreakable which featured stories women writers had never told before and was published just before the Harvey Weinstein revelations. Her most recent non-fiction work is Accidental Feminists, about the fate of women over 50. The Mother is her first novel for adults.