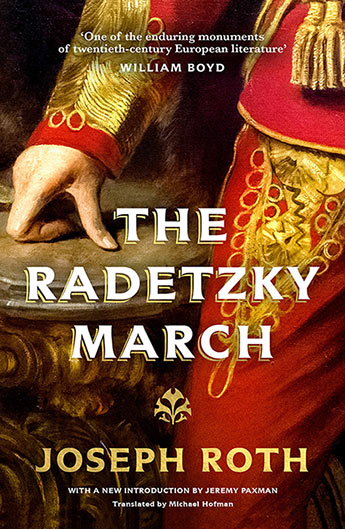 A 20th century classic of European literature: a meditation on the Austro-Hungarian Empire through the prism of three generations of the Trotta family.

The Radetzky March is a meditation on the Austro-Hungarian Empire through the prism of three generations of the Trotta family. The novel opens in 1859 at the Battle of Solferino, when the young Lieutenant Trotta saves the life of the Emperor and is ennobled. He owes the Empire everything, and his son also becomes a conscientious servant of the great multinational state even as it enters into its period of chaos, with competing nationalisms and ideologies tearing it apart. The final generation of Trottas cannot comprehend or survive the collapse of the Empire, which no longer has any purchase on reality.

Beginning at the moment when the Habsburg dominions began to crumble, and ending at the moment when the old Emperor's body is finally entombed in the vault of Capuchins in Vienna, the narrative arc of Roth's novel is perfectly judged. However, it is Roth's intelligent compassion and ironic sense of history that confer on The Radetzky March its greatness.
More books by this author More books in this series

Joseph Roth (1894-1939) was the great elegist of the cosmopolitan, tolerant and doomed Central European culture that flourished in the dying days of the Austro-Hungarian Empire. Born into a Jewish family in Galicia, on the eastern edge of the empire, he was a prolific political journalist and novelist. On Hitler's assumption of power, he was obliged to leave Germany for Paris, where he died in poverty a few years later. His books include What I Saw, Job, The White Cities, The String of Pearls and The Radetzky March, all published by Granta Books.

Michael Hofmann is the highly acclaimed translator of Joseph Roth, Wolfgang Koeppen, Kafka and Brecht, and the author of several books of poems and book of criticism. He has translated nine previous books by Joseph Roth. He teaches at the University of Florida in Gainesville.