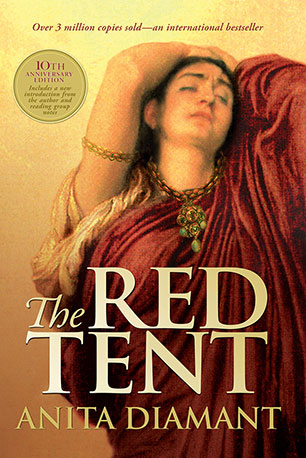 An international publishing phenomenon, this beautiful and thought provoking novel tells the story, lost to history by the chronicles of men, of Dinah, Jacob's only daughter in the Book of Genesis.

'My name means nothing to you. My memory is dust. This is not your fault or mine. The chain connecting mother to daughter was broken and the word passed to the keeping of men, who had no way of knowing. That is why I became a footnote, my story a brief detour between the well-known history of my father Jacob, and the celebrated chronicle of Joseph, my brother.'

Lost to the history by the chronicles of men, here at last is the dazzling story of Dinah, Jacob's only daughter in the Book of Genesis. Moving panoramically from Mesopotamia to Canaan to Egypt, The Red Tent is robustly narrated by Dinah, from her upbringing by the four wives of Jacob, to her growth into one of the most influential women of her time.

Seeking to preserve not only her own remarkable experiences but those of a long-ago era of womanhood left largely undocumented by the original male scribes and later Biblical scholars, Dinah breaks a male silence that has lasted for centuries, revealing the ancient origins of many contemporary religious practices and sexual politics. The result is a beautiful, thought-provoking novel.
More books by this author

Anita Diamant is a prize-winning journalist and writer with a Master's Degree in English from the State University of New York. She is the author of six books about contemporary Jewish practice, including The New Jewish Wedding and Living a Jewish Life. Her first work of fiction, The Red Tent, was published in 1997 and became an international bestseller, with over two million copies sold and foreign editions in more than 25 countries world-wide, including Finland, France, Germany, Holland, Israel, Japan, Korea, Lithuania, Portugal, Spain, and Sweden. Her second novel, Good Harbor was published in 2002 and The Last Days of Dogtown was published in 2005. Diamant lives in Massachusetts, with her husband and grown daughter. Her website is www.anitadiamant.com