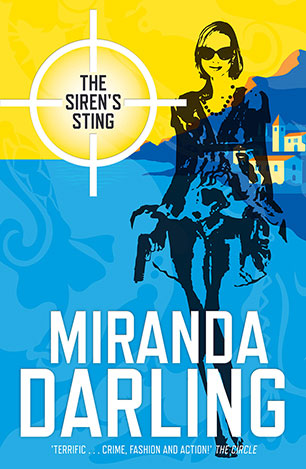 From a masked ball in Venice, to the oilfields of Azerbaijan, and the bullrings of Spain, Stevie Duveen, Risk Assessor for Hazard Ltd, has been offered an assignment she can't refuse . Death wears a vintage Pucci kaftan as our stylish, shadowy and dangerous agent comes face to face with modern piracy in a bid to stay one step ahead of some of the world's most dangerous men.

She was not an action woman: she could not run very fast; she favoured ballet slippers over combat boots, never swore and still suffered from nightmares; she did not enjoy confrontation of any kind. She was reluctant to face risk, and it was a quality that made her very good at her job. Her art lay in her ability to pass unnoticed, to slip in and out of the cracks of life, to be quietly invisible.

Aboard a luxury yacht as the minder of the world's greatest-and most temperamental-opera star, Stevie Duveen manages to thwart a pirate attack off the coast of Somalia, but soon realises the attack is merely one salvo in a ruthless campaign of terror. Other vessels are being hijacked, and ransoms in the multimillions are being demanded as shipping lines and insurance companies run scared.

On the orders of her adored boss and mentor David Rice, Stevie flies to Sardinia's idyllic Costa Smeralda to recuperate from her injuries. Soon, however, a favour for Rice sees her plunge back undercover: a threat assessment on the young son of Vaughan and Cl mence Krok. At first the job seems simple enough, WC only Krok happens to run the world's most powerful army of mercenaries . . .

Posing as just another jet-setting party girl on the lookout for a wealthy husband, Stevie cruises aboard the Kroks' mega-yacht, Hercules, surrounded by arms dealers, aristocrats and billionaires. The action swings from the sun-kissed marinas of the Mediterranean to diva season in Venice, through the oilfields of Azerbaijan and on to the billionaires' playgrounds of Spain, but Stevie soon uncovers more questions than answers: is the Kroks' son really in danger? What secret deal is Krok brokering? How is he connected to the pirate scourge? And why is someone trying to kill her?

At her discreet and dangerous best, Stevie must fight to save everything she holds dear as she finds herself at the heart of a deadly double game.

'Classic Bond crossed with Phryne Fisher on ice.' The Circle.

Miranda Darling began her career as a fashion model in Paris and London, then went on to read English and Modern Languages at Oxford University. She travelled widely to countries such as Russia, Azerbaijan, Croatia, Namibia and Indonesia before returning to Australia to complete a Masters in Strategic Studies and Defence. She analysed new security threats for a think tank, where she published widely in newspapers and journals. She retains an interest in international intrigue and now writes full-time.