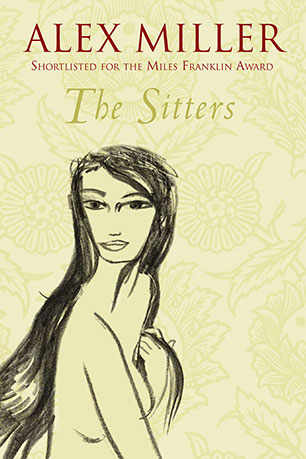 A sensuously written, peculiarly Australian novel about the relationship between a painter and his subject.

'A narrow, vertical painting, tightly enclosing the scene. Her pale arm and her pale thigh. Viewed at a diagonal through an exceedingly tall doorway. just a glimpse of something.'

An ageing portrait artist meets a woman who unsettles him, yet inspires him to paint her. Reluctantly, at first, they are drawn together.

The ambiguity of the relationship between painter and subject is revealed through Alex Miller's subtle, sensuous narrative. The artist must watch and wait to trap the shy beast. For the skill of portraiture is in seeing beyond the face, beyond the likeness.

'Like Patrick White, Miller uses the painter to portray the ambivalence of art and the artist. In The Sitters is the brooding genius of light. Its presence is made manifest in Miller's supple, painterly prose which layers words into textured moments.' - The Sunday Age

'An awesomely elegant, subtly sensuous, stylish exploration of the inner self of an ageing portrait artist. If there were doubts about the maturity of Australian fiction, this book puts those doubts to rest.' - Frank Moorhouse and Sue Woolfe, 1995 NSW Premier's Awards

'The description of the creative process is extraordinary.' - The Weekend Australian
More books by this author

Alex Miller is twice winner of Australia's premier literary prize, The Miles Franklin Literary Award, first in 1993 for The Ancestor Game and again in 2003 for Journey to the Stone Country. He is also an overall winner of the Commonwealth Writers' Prize, in 1993 for The Ancestor Game. His fifth novel, Conditions of Faith, won the Christina Stead Prize for Fiction in the 2001 New South Wales Premier's Awards. In 2011 he won this award a second time with his most recent novel Lovesong. Lovesong also won the People's Choice Award in the NSW Premier's Awards, the Age Book of the Year Award and the Age Fiction Prize for 2011. In 2007 Landscape of Farewell was published to wide critical acclaim and in 2008 won the Chinese Annual Foreign Novels 21st Century Award for Best Novel and the Manning Clark Medal for an outstanding contribution to Australian cultural life. It was also shortlisted for the Miles Franklin Award, the Christina Stead Prize for Fiction, the ALS Gold Medal and the Commonwealth Writers' Prize. Alex is published internationally and widely in translation.