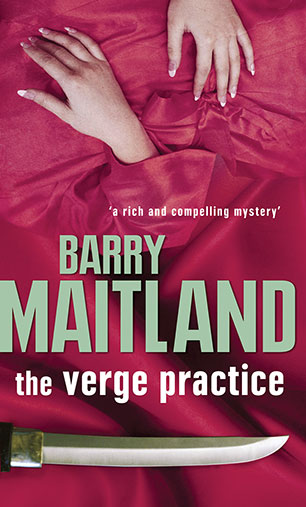 From the backstreets of Barcelona to the sophisticated world of international architecture, this fast-moving mystery cements Maitland's reputation as a writer of intriguing and thrilling crime.;

Following the murder of his young wife, Charles Verge, world famous architect and head of a very lucrative London practice, disappears without a trace. After four months of dead-end investigations, Chief Detective Inspector Brock and his team are called in to achieve the impossible: to find fresh leads and overlooked clues and to finally put an end to the much-discussed Verge mystery. Was this a crime of passion and has Verge escaped to Spain, or even Sydney, as the public sightings suggest? Or is Verge already dead, a victim of the murderer? From the suave world of international architecture to the backstreets of Barcelona, the only thing missing is Verge himself.

In their own often unorthodox style, Detective Chief Inspector David Brock and Detective Sergeant Kathy Kolla manage to unlock the secret that has perplexed and intrigued both the police investigation and the public imagination.

'Maitland does a masterly job keeping so many balls in the air while sustaining an atmosphere of genuine intrigue, suspense and, ultimately, dread. He is right up there with Ruth Rendell . . .' - Australian Book Review on The Chalon Heads

'Maitland gets better and better, and Brock and Kolla are an impressive team who deserve to become household names.' - Publishing News
More books by this author

Barry Maitland was born in Scotland and brought up in London. After studying architecture at Cambridge, he practised and taught in the UK before moving to Australia where he was Professor of Architecture at the University of Newcastle. He has since retired from the university to write full time. Maitland's first mystery The Marx Sisters was a nominee for the John Creasey award for Best First Novel and The Malcontenta won the Ned Kelly Award for Best Crime Fiction.