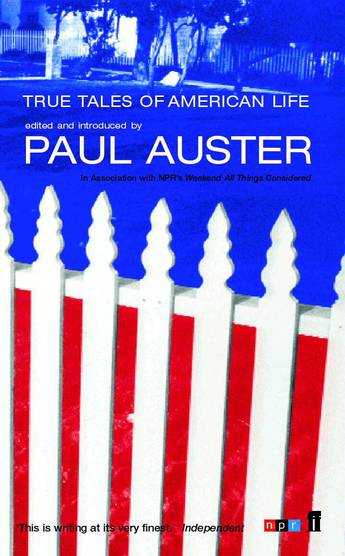 True Tales of American Life is a collection derived from a project launched by Paul Auster on US National Public Radio.

Chosen by Paul Auster from 4000 stories submitted to his programme on National Public Radio, these 180 tales provide a wonderful portrait of America across the 20th century.
More books by this author

Paul Auster was born in Newark, New Jersey in the United States in 1947. He graduated from Columbia University with an MA degree. In 1970 he worked as a merchant seaman on an Esso oil tanker. From 1971 to 1974 he lived in France, spending two years in Paris and one in Provence. After returning to New York in 1974, he began his writing career. Throughout the 1970s he wrote mainly poetry and essays which appeared in various magazines including the New York Review of Books. During the 1980s he concentrated on prose writing: a memoir and four novels were published.His screenplay Smoke and Blue in the Face was published in April 1996 to coincide with the release of the film, and in 1999 Faber published the screenplay Lulu on the Bridge. The Art of Hunger (a collection of essays, interviews and prose) and his Selected Poems were published in November 1998.He is the author of nine novels, including The New York Trilogy.