Marsupial Outlaws and Other Rebels of Australia's War in Vietnam 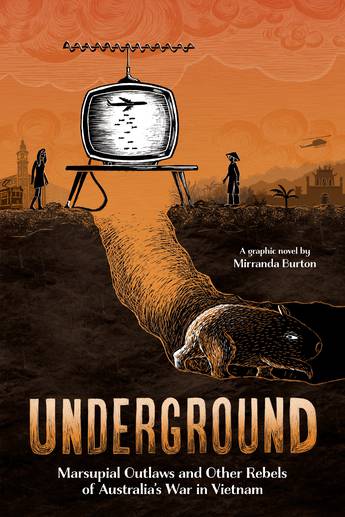 Led by an unconscientiously objecting wombat registered for military service during Australia's war in Vietnam, Underground digs tunnels through a chapter of Australian history that many have attempted to bury.

Why would a wombat be registered for war?

It's 1965, and an old Tattersalls barrel starts rolling marbles to randomly conscript young Australian men to fight in the war in Vietnam. Melbourne housewife Jean McLean is outraged, as are her artist friends Clif and Marlene Pugh, who live in the country with their wombat, Hooper.

Determined to wreck the system, Jean forms the Save Our Sons movement's Victorian branch, and she and her supporters take to the streets to protest. Meanwhile, in the small country town of Katunga, Bill Cantwell joins the Australian Army, and in Saigon, young Mai Ho is writing letters to South Vietnamese soldiers from her school desk. And when Hooper's call-up papers arrive, he mysteriously goes underground…

As these stories intersect in unexpected ways and destinies entwine, a new world gradually emerges - a world in which bridges of understanding make more sense than war. This stunning graphic novel, full of empathy, courage and resistance, is based on true events.

'Every drawing reflects a Vietnamese history era in which I grew up and witnessed the war. I cannot thank you enough for this memory.' MAI HO

'I wish I had this growing up. It's incredibly informative. Stories like this are severely lacking, and for an Australian audience, I think it will be revelatory.' MATT HUYNH
More books by this author

Mirranda Burton was born in Auckland, New Zealand, in 1973. She became a printmaker at the age of ten, a dedicated marimba player in her teens, and a Super 8 stop motion filmmaker at 21. She graduated from the North Adelaide School of Art in South Australia in 1995 with an Advanced Diploma, and in 2004 finished a Bachelor of Multimedia Design at Swinburne University in Melbourne. Working for many years in commercial and independent animation and as a visual artist was the catalyst for making graphic novels, and in 2011 her first book, Hidden, was published by Black Pepper Publishing. Hidden was also released in French under the title Caches by La Boite a Bulles.

In 2011 Mirranda became artist in residence for two years at Dunmoochin in Australian artist Clifton Pugh's former studio. During this residency she also learned of the Pughs' wombat, who was registered for military service in Vietnam in 1972, which started a long investigation into Australia's involvement in the Vietnam War, resulting in her graphic novel Underground: Marsupial Outlaws and Other Rebels of Australia's War in Vietnam.

The book was completed in a little shack in bushland north-east of Melbourne shared with a number of recalcitrant wombat tenants under the floorboards. In her spare time Mirranda reads, finds new spaces to grow plants, and tries to occasionally practise her marimba.