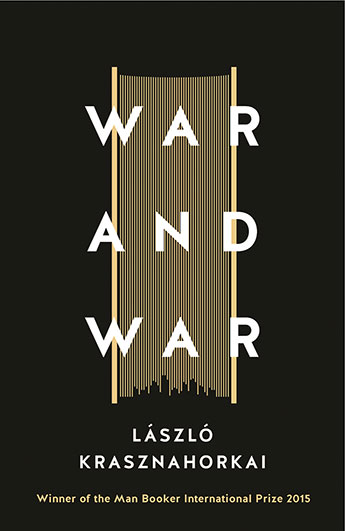 One of Laszlo Krasznahorkai's most loved books, published in the UK for the first time.

War & War begins at a point of danger: on a dark train platform Korim is on the verge of being attacked and robbed by thuggish teenagers. From here, we are carried along by the insistent voice of this nervous clerk. Desperate, at times almost mad, but also keenly empathic, Korim has discovered in a small Hungarian town's archives an antique manuscript of startling beauty: it narrates the epic tale of brothers- in-arms struggling to return home from a disastrous war.

Korim is determined to do away with himself, but before he commits suicide, he feels he must escape to New York with the precious manuscript and commit it to eternity by typing it all out onto the world wide web. Following Korim with obsessive realism through the streets of New York (from his landing in a Bowery flophouse to his move far uptown with a mad interpreter), War and War relates his encounters with a fascinating range of people in a world torn between viciousness and mysterious beauty.

Following the eight chapters of War & War is a short 'prequel acting as a sequel', 'Isaiah', which brings us to a dark bar, years before in Hungary, where Korim rants against the world and threatens suicide. Written like nothing else (turning single sentences into chapters), War & War affirms W. G. Sebald's comment that Krasznahorkai's prose far surpasses all the lesser concerns of contemporary writing.
More books by this author

L.szl. Krasznahorkai was born in Gyula, Hungary, in 1954. He has written five novels and won numerous prizes, including the International Man Booker Prize 2015, 2013 Best Translated Book Award in Fiction for Satantango, and 1993 Best Book of the Year Award in Germany for The Melancholy of Resistance

For more about Krasznahorkai, visit his extensive website: http://www.krasznahorkai.hu/