Home>Browse>Books>Fiction>Watching the Climbers on the Mountain

Watching the Climbers on the Mountain 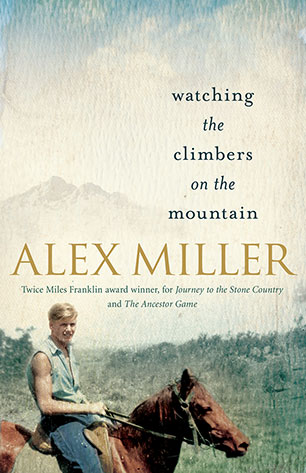 'His beauty and aloofness disturbed the equilibrium of the Rankin family.The stockman for a long time offered a resistance to the efforts of the members of the family to involve him in their lives. He moved about in their familiar world, observing it with unfamiliar eyes; and quietly, industriously he slowly rearranged it.'

Ward Rankin had not wanted to be tied to the station; he'd imagined a life of travel and experience but there was no-one else. When his mother died, it came to him - owner and manager, now in his fifties, a frustrated man. Ida, his young wife, sees a solution to her own discontent in her growing feelings for the young English stockman Robert Crofts, whose arrival on the station changes their lives forever.

Set in the remote Central Highlands of Queensland against a backdrop of heat, torrential rain and the strange and lonely landscape, this is a novel of passion, suspense, reinvention and revenge, watched over by the solitary presence of Mt Mooloolong.

Alex Miller is twice winner of Australia's premier literary prize, The Miles Franklin Literary Award, first in 1993 for The Ancestor Game and again in 2003 for Journey to the Stone Country. He is also an overall winner of the Commonwealth Writers' Prize, in 1993 for The Ancestor Game. His fifth novel, Conditions of Faith, won the Christina Stead Prize for Fiction in the 2001 New South Wales Premier's Awards. In 2011 he won this award a second time with his novel Lovesong. Lovesong also won the People's Choice Award in the NSW Premier's Awards, the Age Book of the Year Award and the Age Fiction Prize for 2011. In 2007 Landscape of Farewell was published to wide critical acclaim and in 2008 won the Chinese Annual Foreign Novels 21st Century Award for Best Novel and the Manning Clark Medal for an outstanding contribution to Australian cultural life. It was also short-listed for the Miles Franklin Award, the Christina Stead Prize for Fiction, the ALS Gold Medal and the Commonwealth Writers' Prize. Alex is published internationally and widely in translation. Autumn Laing, his tenth novel, was published by Allen & Unwin in 2011. Watching the Climbers on the Mountain was originally published in 1988.