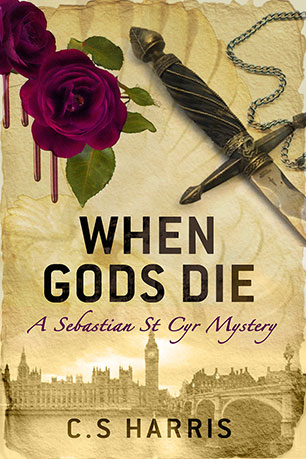 Sebastian St Cyr returns in another gripping tale of murder and passion in Regency England, that blends history and suspense, character and plot, imagination, romance and classic mystery.

Still shadowed by rumours of his dangerous past, Sebastian St. Cyr, Viscount Devlin, returns in another gripping tale of murder and passion in Regency England.

In 1811, on a summer evening at the Royal Pavilion in Brighton, the beautiful young wife of an ageing marquis is found dead in the arms of the Prince Regent himself. Around her neck lies an ancient bluestone-and-silver necklace that legend credits with mysterious powers.

Sebastian is lured into a dangerous investigation of the marchioness's death which appears to be mysteriously linked to the dark past of his own family. With the aid of his lover - Kat Boleyn, a beautiful actress hiding secrets of her own - and his new servant, Tom, a reformed pickpocket, Sebastian follows a twisted trail that leads from the luxurious wealth of Brighton palace to the most depraved London slums. And when one murder is followed by another, he confronts an insidious conspiracy that imperils those nearest to him even as it threatens to bring down the monarchy.

'Fans of historicals, especially those set in Regency-era England, will snap up this triumph.' -Library Journal, starred review

'Regency England comes to life in the second novel in Harris' Sebastian St. Cyr historical suspense series, which will keep you reading and guessing.'-Romantic Times, 4 stars

.
More books by this author

CS Harris is the pen-name of Candice Proctor, a retired university history professor and a respected scholar of the French Revolution and nineteenth century Europe. She writes across genres under different pen names. http://csharris.blogspot.com