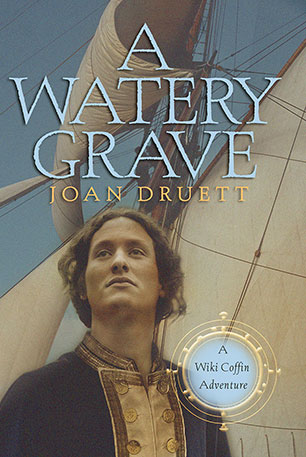 In the first book in the Wiki Coffin adventure series, Wiki embarks as linguister for the US Exploring Expedition. Though beset by enemies, and under a cloud of suspicion himself, his mission is to expose a vicious, opportunistic murderer.

It's 1838 and Wiki Coffin, half-blood Maori son of a Salem ship captain, waits on the banks of the Elizabeth River, Virginia. Pistols ready, he is scheduled to fight a duel but instead discovers a boat drifting with a dead woman inside. When the law arrives he is the immediate suspect and is placed under arrest. Wiki has to watch helplessly as the ships of the US Exploring Expedition sail off on their epic voyage to the Pacific and Antarctic, leaving him - their expert linguist - behind.

Luckily, Wiki proves his innocence in the nick of time and is able to join his ship. But there's a catch. The local sheriff is convinced that the real murderer is on board the expedition. Amid great peril and beset by enemies, the task falls to Wiki to catch the killer and ensure that justice is served on the high seas.
More books by this author