A Chet and Bernie mystery 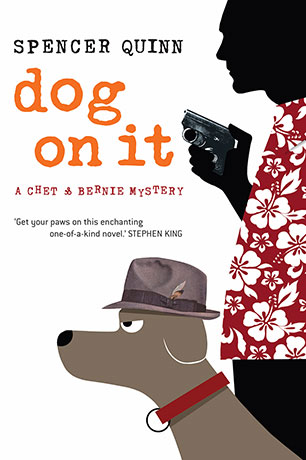 Fabulous, funny new detective novel featuring Bernie, a slightly down-at-heel PI and his offsider, Chet, a dog (and the captivating narrator of the story).

I could smell him - or rather the booze on his breath - before he even opened the door, but my sense of smell is pretty good, probably better than yours.

So begins this fabulous, funny new detective novel featuring Bernie, a slightly down-at-heel PI; and his offsider, Chet, a dog - and the captivating narrator of the story.

Chet may have flunked out of police school (I'd been the best leaper in K-9 class, which had led to all the trouble in a way I couldn't remember exactly, although blood was involved), but he's just as much a detective as Bernie - superior, sometimes, in his insight into human foibles.

In Dog On It, their first adventure, Chet and Bernie investigate the disappearance of a teenage girl who may or may not have been kidnapped, but who's definitely gotten herself mixed up with some very unsavoury characters.
More books by this author More books in this series

Spencer Quinn lives on Cape Cod with his dog Audrey, and is hard at work on the next Chet and Bernie adventure.